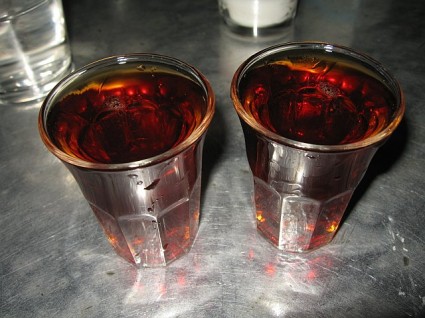 Update: Matt Nash from NowLebanon was able to get ahold of Minister Abboud who clarified the matter and stated the below:

Asked if the shot is banned or not, Abboud replied: “No no no no, alcohol is not banned in this country, anything prepackaged and named after a drug is banned.” A little research revealed there is an energy drink called “Cocaine.” I haven’t been able to figure out whether or not the drink is being sold in Lebanon, but if it was being sold, it won’t be any more. So, fans of the shot, fear not, your local booze slinger can still serve them up. Happy Friday, folks.

This is probably the funniest thing I’ve read in a while. According to MTV and a couple of other websites, the Ministry Of Tourism has decided to ban the shot “Liquid Cocaine” and any product with references to narcotic plants. I tried looking for the law on some official website just to make sure and ended up finding it on The Presidency of the Council of Ministers website. The proposed law dates back to 2011 but apparently lacked funding.

I urge all bars to rename Liquid Cocaine to Liquid Chanklish and serve it from now on.