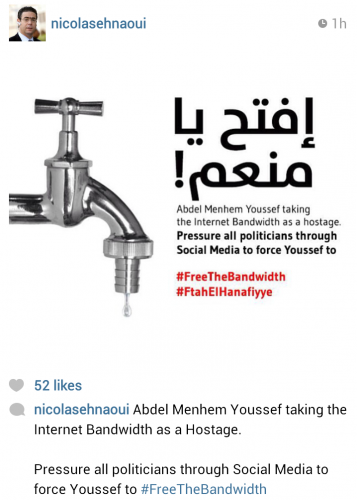 Telecom Minister Sehnaoui posted this picture today on his instagram account blaming Ogero Telecom chief Abdel-Moneim Youssef on the slowness and asking him to free the bandwidth.

Even though I agree with Minister Sehnaoui that Youssef’s behavior is unacceptable, I refuse to solely put the blame on one side as there are two fundamental issues that are at the origin of this problem:

1- Ogero’s existence is a problem in itself.
2- The constant bickering and lack of dialogue between opposing political opponents in Lebanon is leading to deadlocks, leaving us Lebanese to suffer.

I cannot believe that no one is able to reach Ogero’s chief or set a meeting to sit and talk with him. If that’s the case, then legal action should be taken against him or he should be forced to resign or the concerned people should head to Ogero and ask to meet Youssef, or organize a protest etc …

This matter has been dragging for months just because no one’s been able to meet or talk to Youssef? Let’s storm Ogero and free the bandwidth then. Will that solve our internet problems? Definitely not.

I’ve already tried to assess the internet situation in Lebanon in a previous post, which I believe still applies now. You can read it [Here].

And here’s my take in the article on Ogero:

Having a state-owned (privately-managed) entity controlling the Telecom sector is a recipe for disaster and the past years are a clear proof of that. Regardless of political affiliations, it is illogical to let one company control everything and then expect other privately owned ISPs to compete with it. I am not saying Ogero is bad but this monopoly is an obstacle to a healthy competition and should be halted either through privatization or other means. Last but not least, I think more efforts should have been put by both sides to settle the differences as we’ve wasted precious years and are now way behind technologically.

Speaking of problems, I urge Minister Sehnaoui to reconsider the new mobile regulations since I haven’t heard one single positive feedback on this matter from the Lebanese Online Community.