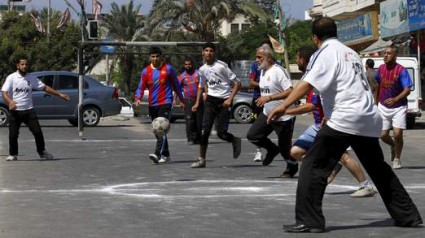 That’s not the Clásico I am talking about

For those of you who thought watching El Clásico, the most followed club football match in the world between Barcelona and Real Madrid, was hard, think again as BDS (the Boycott, Divestment and Sanctions Movement) figured out an intelligent way (surprisingly) to get free invites to the game. For other BDS noticable achievements click [Here].

Now read and learn how you can defeat the Zionist conspiracy and regain the invaded Palestinian territories and free the Shebaa farms by simply going to the Camp Nou. I am trying to see if Shalit is invited to the next Clásico at Santiago Bernabéu so I can gather my friends, start a boycott campaign and maybe win tickets to Madrid.

On September 28, the Boycott, Divestment and Sanctions (BDS) Movement called on Barcelona FC not to host Shalit, saying there are “more than 5,000 Palestinian political prisoners remain rotting, many in isolation, many with no visits, many on hunger strike with no attention or care for them to be released.”

Fifty five clubs and individuals have signed the BDS online petition to urge Barca to go back on its decision.

Realizing that a fiasco is in the making, Barca club officials announced that they invited three Palestinian figures to attend the game in an aim to counter-act Shalit’s presence. Two officials attended, while Palestinian national team footballer Mahmoud Sarsak, who was held by Israel without official charges, decided to boycott. [Link]

The funny part is that they were asking Barcelona not to host Shalit, then ended up accepting three invites, which means that not only did they go against their demands but they equaled an Israeli prisoner to 3 Palestinian prisoners. If this story doesn’t prove how useless boycott is, I don’t know what does.