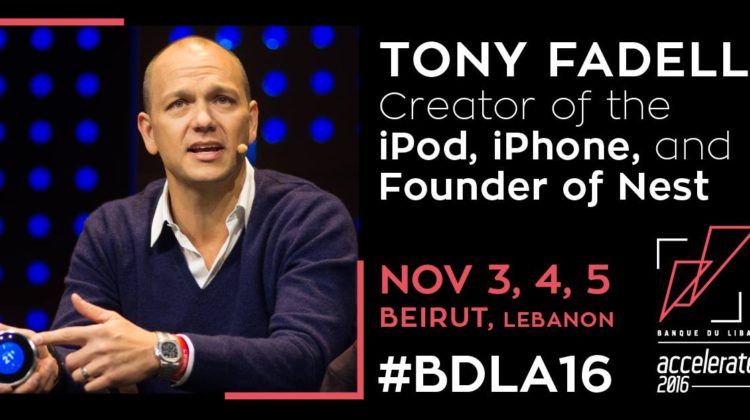 BDL Accelerate 2016 first declared Apple Co-Founder Steve Wozniak as a speaker at the conference this year, and yesterday they announced that Lebanese-American Tony Fadell, mostly known for being the iPod ‘Godfather’ back when Apple decided to launch the famous music player, will also be a speaker this year. Fadell also helped in creating the iPhone.

Fadell is a brilliant Lebanese-American entrepreneur, inventor and designer. He was acknowledged in 2013 as one of Business Insider’s Top 75 Designers in Technology, Fast Company’s 100 Most Creative People, and CNBC’s Top 50 Disruptors. Two years ago, Google bought Fadell’s Nest Labs for a whooping $3.2 Billion!

Tony Fadell founded Nest Labs where he modernized home gadgets and pioneered the “internet of things” before being acquired by Google. Fadell left Alphabet (Google) earlier this year.

This year’s lineup is pretty exciting and there are plenty of interesting startups competing as well. What I don’t get though is why the prize is only $10,000. Winning startups should be fully funded for a year or so in order to succeed and as far as I know, there are hundreds of millions of dollars allocated by the BDL for that purpose.

You can check out the full lineup [here].