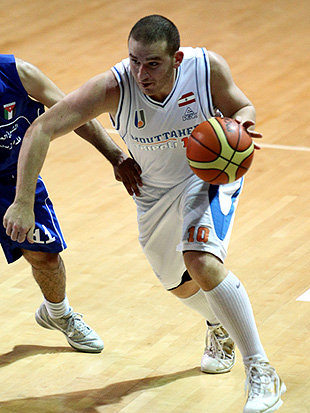 As the story goes â€” and, to be honest, we’re having a tough time processing it ourselves, especially without video of some made shots â€” the 27-year-old Akkari, who had averaged just 7.6 points per game in the 23 games he’d previously played for Tripoli basketball club Mouttahed this season, scored 113 points on 40-of-69 shooting in a 173-141 win against Bejjeh in a Lebanese Division A League game. That total, which reportedly includes a ludicrous 32-of-59 mark from 3-point land, would FAR outstrip every single-game mark in the history of FIBA competition. [Link]

One of our readers (Gianni) posted a link to the story mentioned above in my previous post, so I called a friend of mine who plays for one of the Lebanese basketball teams to make sure it’s not a joke and it turned out to be true!

The game between Mouttahed and Bejjeh ended 173-141 and Akkari, who plays for Mouttahed, did indeed score a total of 113 points (32 of 59 3-pointers). However, what the article does not say is that Bejjeh’s key players did not participate in the game and it was more of a training session for Mouttahed. I don’t know what the reason behind Bejjeh not participating is but the Lebanese Basketball Federation should have stopped this game and let Mouttahed win 20-0. Akkari apparently was rehearsing his 3-pointers and barely made any effort on defense. That doesn’t mean he’s not a good player, but that’s now the way to make records as it’s harmful to the team and to the Lebanese league.

The fact that he averaged just 7.6 points in the last 23 games he played says a lot about this game and about how unprofessional Basketball in Lebanon has become.