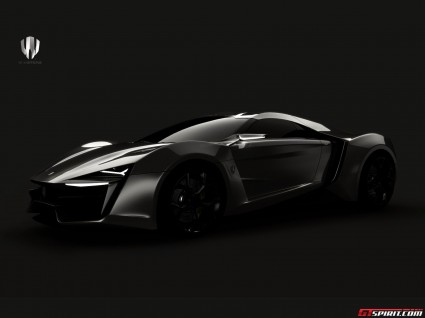 W Motors are set to be the premier manufacturer of hyper cars in the region. At the helm of the project is Ralph R Debbas, who graduated from Coventry University School of Art and Design with a major in Automotive Design.

Two cars are set to be launched, the Hyper-sport and the Super-sport. The Hyper-sport is set to come first with a limited production run of only five cars. So far, we know that the cars will host signature diamond-encrusted LED lights, a holographic display, a carbon fiber frame, a gold plated hood (oh noâ€¦ cue the cliche comments) and gold or platinum keys. The power source comes in the form of a mid-mounted, twin-turbo 6-cylinder engine that pumps out 750hp. With an acceleration time of 0-100km/h of 2.8 seconds and a top speed of 385km/h, the Hyper-sport is up there with the best of them. [Link]

The Hyper-car will privately be unveiled in Dubai in December of this year, while a public launch will follow at the Qatar Motor Show in January 2013. Honestly, I think it’s a bit too ambitious to compete at this high level so quickly. Wouldn’t it more suitable if we built a decent everyday Lebanese car first?

I mean how are they going to make a car that performs better than the Bugatti Veyron? Or more technologically advanced and designed than the Aston Martin One-77? Who cares about gold plated hoods?

If the aim is to design and build the worldâ€™s most exclusive, luxurious and technologically advanced high performance sports cars, producing 5 cars only isn’t going to do the trick and you’re up against a very fierce competition of experienced and legendary brands. Here’s a sample of supercars that Ralph Debbas will have to go against.

I don’t want to sound pessimistic but that’s one heck of a challenge that I wouldn’t take personally if I had the money and expertise.

See Also:Where Did All The Traffic Go In Nahr El Kalb?
Posted By Najib
Categories AUTOMOTIVE,INFORMATION,LEBANON