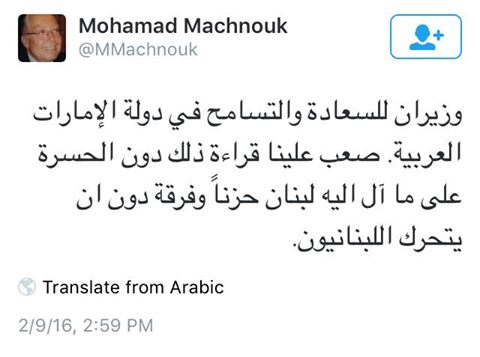 After the United Arab Emirates announced the creation of a minister of state for happiness, Lebanon decided to follow suit by appointing an “In-denial Minister” in the upcoming government. This new minister would try to fulfill our youth’s aspirations and achieve the Lebanese people’s ambitions by refusing to accept facts and living in complete denial the whole time. Moreover, a minister of state for happiness wouldn’t make sense because all our ministers are happy by default (سعادة النائب).

One of the many candidates for this new ministry will be our current environment minister Mohammad Machnouk, if he were to validate his last tweet, where he congratulated the UAE for the new ministries and wished if Lebanese had done anything to make a change in the past few months.

Of course demonstrating for months, holding a sit-in inside the Environment ministry, staging an open-ended hunger strike until Environment Minister Mohammad Machnouk resigns were all part of the 2015 Beirut International Festival and not addressed against the minister.