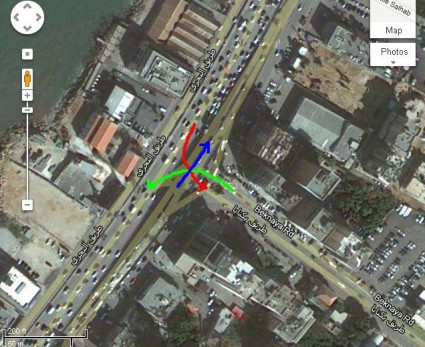 We are all very happy that the government and head of the council of development and recontruction decided to dismantle the Jal el-Dib metal bridge within 5 days, but did they think about the extra traffic that closing this bridge might cause?

As you see in the picture above, the Jal el-Dib bridge is a key bridge as it allows:
– People coming from Jounieh/Dbayyeh to get into Jal el Dib or Zalka or head upwards towards Bsalim. (Red Line)

– People coming from Bsalim/Bkenaya/Mezher and surrounding areas to get to the Nahr el Mot/Dora/Beirut highway. (Green line)

– People coming from Zalka towards Jal el Dib to get back on the highway leading to Nahr el Mot/Dora/Beirut.

While cars pass under the bridge in the colors mentioned above, the Blue line corresponds to the normal flow of cars that cross the bridge coming from Dora/Nahr el-Mot/Beirut.

Having said that, closing the bridge will force cars whose destination is between Jal el Dib and Nahr el Mot to use the inside roads from Antelias or go all the way to Nahr el Mot, make a U-turn and come back. (See two pictures below)

The traffic in Antelias and Nahr el Mot is already agonizing in the morning, so closing down the bridge will make even worse.

What should the government do?
– Dismantle the current bridge and setup a temporary metal one until the new bridge is ready. This should be done within few days time as it was already done in the South after the July war and the bombing of several bridges. This would slow down traffic but is better than nothing.

If this option is not feasible, and the new bridge will take few months at least to be finished, then maybe we should all sell our cars and buy bikes. 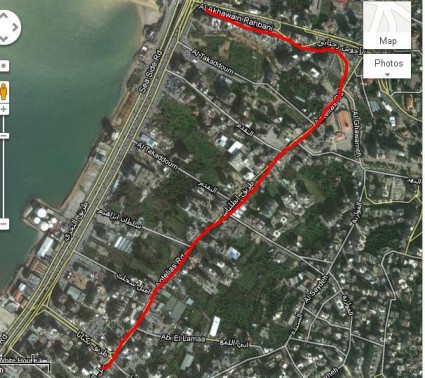 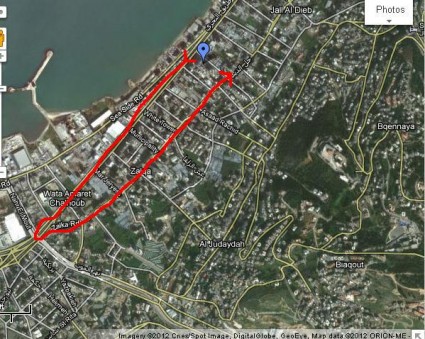