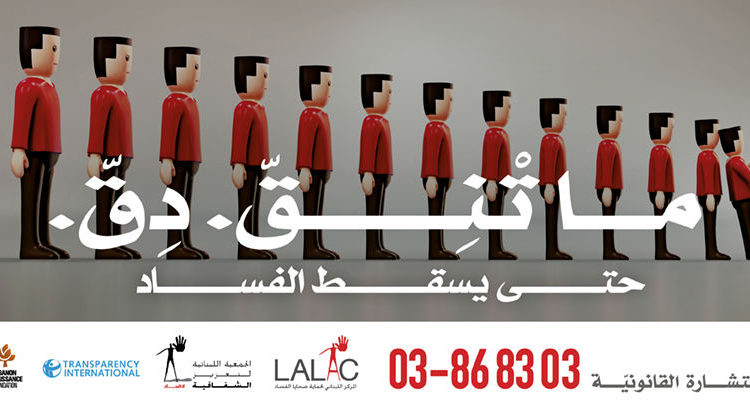 We all had to bribe someone in Lebanon at some point. I hated the idea and always did everything I could in order not to but it’s simply not possible. Luckily enough, I just had to do so a couple of times only but I’ve reported both cases to concerned parties and local NGOs and actions were taken against one of the corrupt officials.

The Lebanese Transparency Association along with The Lebanese Advocacy and Legal Advice Center (LALAC) have been fighting corruption for years by providing information, referral and advice services to more than 1,500 people in Lebanon. “More than 700 people have approached LALAC since 2013, and more than 400 individuals have requested legal advice on specific cases, from tampered water supplies, to police harassment, real estate bribery and alleged sexual exploitation by a high-ranking regional official”.

People in Lebanon are willing to engage in the fight against corruption by either reporting corruption cases or seeking help through initiatives like the one launched recently by The Lebanese Transparency Association and The Lebanese Advocacy and Legal Advice Center with the support of the European Union (EU), the Lebanon Renaissance Foundation (LRF), and the U.S. Middle East Partnership Initiative (MEPI) through the Center for International Private Enterprise (CIPE).

How can you take action against corruption?

2- A legal advisor will then contact you within 48 hours to collect additional information and discuss the case.

3- After establishing that this is an identifiable act of corruption, both parties agree on the steps to follow. When a citizen is willing to take action against a case of corruption they have witnessed or experienced, the legal team explains the legal situation and the person’s rights, and provide advice on how to move forward with the complaint, including which authority to refer to, how to submit an official complaint, and whether any additional documents or evidence are necessary.

4- The LALAC team is dedicated to protecting the confidentiality of all victims, witnesses and whistle-blowers and will record the contact as “anonymous” as desired.

You can always report the case as anonymous, what matters is to fight corruption in one way or the other.