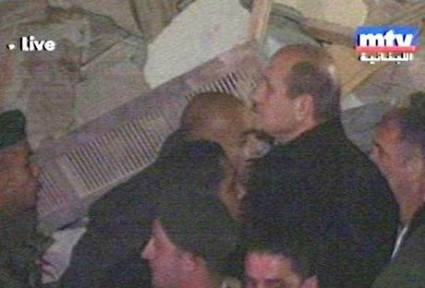 [Only Picture I found of Marwan Charbel wearing a coat]

President Sleiman was on a visit to Romania this week and Interior Minister Marwan Charbel, who was with him, had his coat stolen twice.

The first theft took place during a dinner thrown in Suleimanâ€™s honor by his Romanian counterpart Traian Basescu. The minister had handed his coat over to the coat check upon his arrival to the dinner, but when it was time to leave, the garment was not found. Officials of the Romanian presidential palace were quick to inform Basescu of the incident, who promptly presented the interior minister with a new one.

Charbel was robbed yet again during another dinner, with Basescuâ€™s coat being the new victim.
[Link]

He was granted a third coat on the last day. It would be interesting to know what brand that coat was.