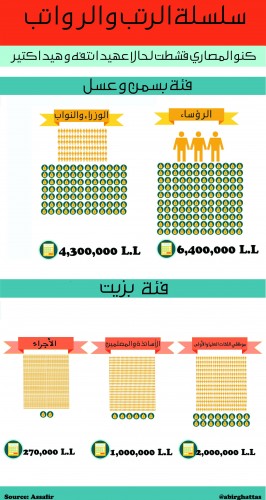 Infographic on the new wages scale prepared by Abir

I was almost sure that PM Miqati will reconsider the increase in salaries for the three top presidential posts of the country, the ministers and the parliament members but instead the government passed the law as it is, which means we just added $1.2 billion for our state treasury to cover. [Link]

I believe it still can get rejected in the parliament but I am not sure about that. Nevertheless, it’s really ironic how Lebanese don’t feel concerned with this raise while they organize huge protests to support Syria or Palestine or to denounce an Anti-Islam movie.