Saudi Women were planning to hold a drive-in today to try and drop the ban against women driving (Yes you heard me right driving!) in the Kingdom of Saudi Arabia, but it was cancelled after several threats against the organizers, or maybe they end up listening to the “wise” Saudi Sheikh who warned them that driving could affect the ovaries and pelvis lol!

The [Website] that was launched on this occasion was also hacked.

Women rights in the Middle East are not something to be proud of, even in Lebanon. Some might be laughing at this Saudi law but Lebanon is still very far behind in terms of equality and women rights. We need have laws that protect women from domestic violence, allow them to give the nationality to their children, and encourage them to engage in the political life.

“Out of caution and respect for the Saudi Interior Ministry’s warnings… we are asking women not to drive and on October 26 and to change the initiative from an October 26 campaign to an open driving campaign, activist Najla Al Hariri told AFP. 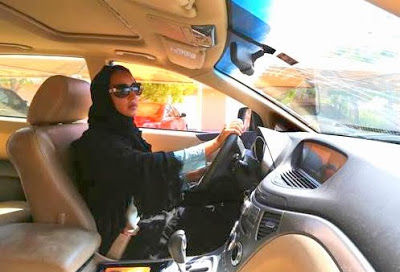