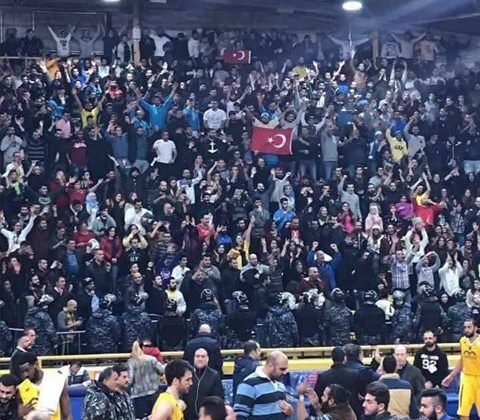 The Lebanese Basketball Federation fined Riyadi and banned their fans from attending the next game after Turkish flags were raised and disrespectful slogans were chanted during their latest encounter with Homenetmen. Sagesse fans were also banned yesterday from attending one game after their disrespectful behavior in their most recent game.

The sad part is that these fines will not change anything, as some Riyadi fans are already back on the attack and spreading hate on social media and the Riyadi management did not apologize properly for what happened but instead said things were blown out of proportion online. It’s really shocking that you have to explain to people that insulting a whole community and praising a country responsible for massacring hundreds of thousands of people is wrong. In all cases, this is not related to Riyadi fans only but to all the Lebanese Basketball teams without any exception.

I’ve been following Lebanese basketball for over 15 years and the game is slowly but surely dying due to the federation’s and the team’s incompetence and lack of sportsmanship. I’ve witnessed endless fights during Hekmeh-Riyadi games and no one has ever taken a serious initiative to stop these sectarian and hateful fans. Instead, all we got are some nicely orchestrated PR stunts with Zein el Omar cheesy songs playing in the background.

1- The teams and their management for not controlling their fans.
2- The Federation for failing to inflict several punishments on such behavior.
3- The media for their mediocre coverage and lack of ethics.

All in all, it’s saddening what Lebanese basketball has been turning to year after year. We barely have any new Lebanese talents, the federation is insisting on keeping three foreign players instead of two, and tensions between fans is getting worse by the year.

Let’s see if the newly elected federation will be able to make any positive changes but I’m not very hopeful.