I love Formula1 and I’ve been following it regularly since the early 90s. I even flew to Italy two years ago to watch the Monza GP, one of my favorite tracks (Spa Francorchamps being my all-time favorite).

F1 has changed drastically since the 90s and the new tires introduced three years ago have spoiled some of the fun for a lot of fans as drivers were more concerned with preserving their tires than racing. In fact, there are a lot of technicalities that the driver has to worry about, unlike the early days where it was all about racing and that’s what the movie Rush is all about.

I wasn’t born back in the 70s but I read a lot about F1 during this period, watch tons of documentaries and YouTube videos and was always amazed by the way races were organized and the risks undertaken by drivers back then. Of course it was a major improvement from the 1950s and 1960s where people would stand on the track to watch the race but you’d have to be extremely talent and very brave to race in F1 back then.

One of the greatest rivalries in F1 history took places in the 1970s between James Hunt and Niki Lauda and luckily for us F1 fans, Rush is a biographical action film that tries to reproduce the 1976 Formula One season and the rivalry between these two. The Hunt-Lauda rivalry resembles a bit the Senna-Prost one as Lauda was a cool and technical genius while Hunt was a highly controversial driver and just crazy! 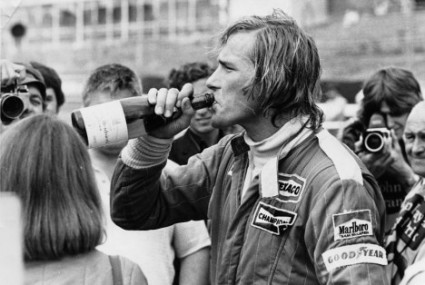 For those of you who never heard about Hunt, this man had a ritual of throwing up before every race, most of the time due to the heavy drinking and partying the night before, he got drunk on his wedding, he was a sex addict as he’d have sex before climbing into the cockpit, he’d take his Oscar, his German Shepherd, on dinner dates in London etc …

Hunt was probably the most controversial figure F1 has ever witnessed and he reminds me a bit of Kimi Raikonnen, who funnily enough, entered and won a snowmobile race in his native Finland under the name James Hunt, and often checks into hotels and makes reservations using the alias. [Source]

As you might have noticed, I have a lot to say when it comes to F1 but it’s just to show how excited I am about this new F1 movie and F1 in general. Speaking of F1 movies/documentaries, Senna is the best F1 documentary I’ve ever seen and I highly recommend it. I’ve watched it over 10 times so far.

Rush’s release date should be October 3 in Lebanese theaters.