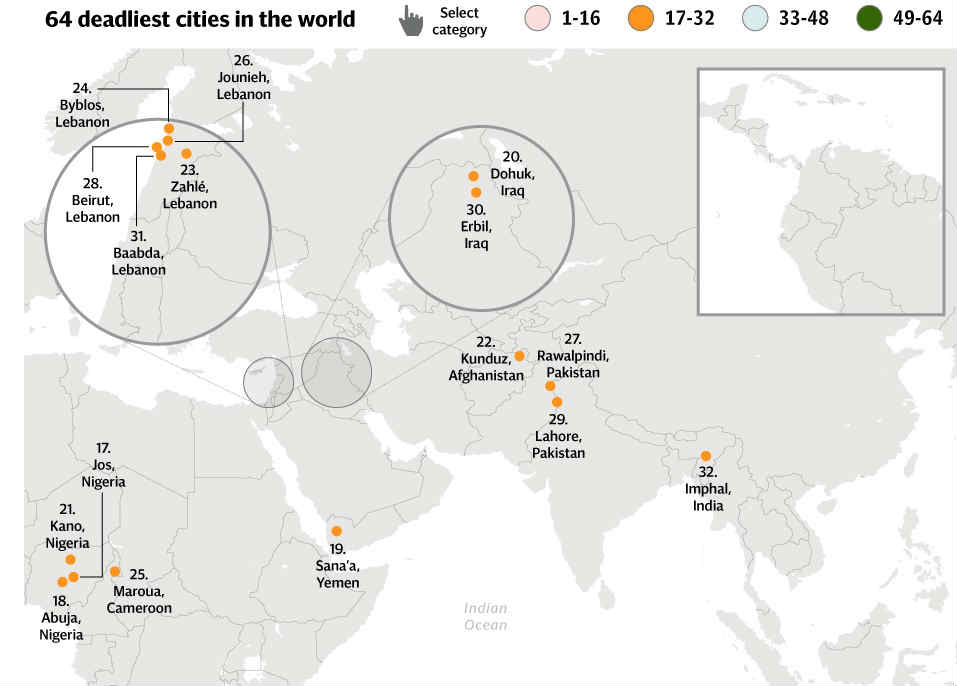 I am going to label this post under “Humor” because this is an absolutely ridiculous list that makes no sense whatsoever and I’m quite surprised that the Telegraph and Time decided to share it without double checking some of its findings. Out of the 64 cities categorized as “extreme risk” in Verisk Maplecroft’s new Global Alerts Dashboard (GAD), there are 6 Lebanese cities: Beirut, Byblos, Aley, Baabda, Jounieh and Zahlé.

Noting that the rankings are based on “an online mapping and data portal that logs and analyses every reported terrorism incident down to levels of 100m² worldwide”, and that is based on the “intensity and frequency of attacks in the 12 months following February 2014, combined with the number and severity of incidents in the previous five years”, I am not sure how cities like Byblos, Aley, Baabda, Jounieh and Zahlé made the list while Tripoli wasn’t even mentioned. When was the last time you heard about an attack in Jounieh, Byblos or Baabda? The areas aren’t even close to conflict areas like Zahle is. Moreover, how is Beirut more at risk of a terror attack than Damascus?

Funnily enough, I was just praising Jbeil yesterday for winning the Arab Tourism Capital Title for 2016 and now it’s on some world’s deadliest cities list.

Update: I am going to email the Telegraph and Time and ask them to revise this article.