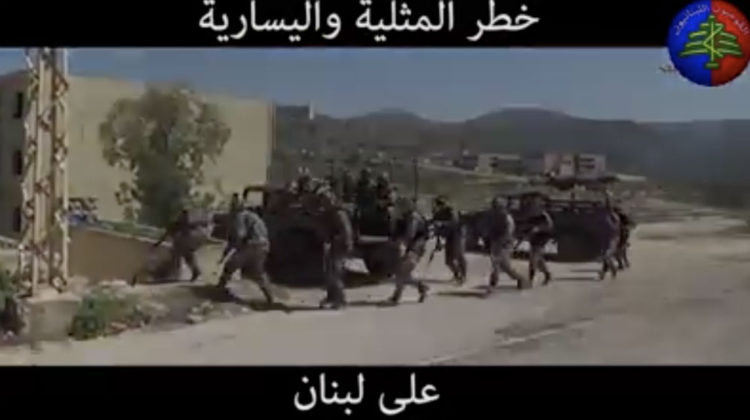 I don’t even know where to start with this video. I’m not sure if it was meant to be satire or a serious one because nothing adds up.

Here’s what they’re saying briefly:
– In the 21st century, Lebanon has been witnessing the rise of NGOs and organizations defending the rights of the LGBT community and it all started with articles in leftist papers, which is a clear proof that there are active marxist movements in Lebanon.

– LGBT groups are a clear threat on the Lebanese state as they’ve been supportive of illegal immigration in the West and exerted repeatedly pressure on media outlets. At this point, they quoted “Obama” (I Kid you not LOL!) then moved on to explain how these groups were responsible for cutting funds to the military and setting up disastrous economic for their countries. Here they were showing Germany’s chancellor Angela Merkel (knowing that Germany is the largest national economy in Europe and the fourth-largest by nominal GDP in the world).

– Then they moved to Lebanese parties and claimed there are at least two parties for every sect, and that they all work for their own interest, which is probably the only accurate information in this whole video LOL!

– To sum things up, they argue that Lebanese Nationalism is the only way to make Lebanese great again.

I have no idea who these people are, but somehow they were able to mix leftism, marxism, homosexuality, illegal immigration and the military and they strongly believe that the only salvation is to rally behind a national identity and attack the gay community, the source of all evil in Lebanon (according to them).

Come to think it, they’re right. Why are we still drowning under garbage? Why haven’t we had elections for the past 9 years? Why don’t we have 24/7 electricity? A shitty internet? Water shortage? traffic? ever-increasing pollution? armed militias? lawless areas? Why are we suffering from the Syrian crisis? Why do we have such a lousy infrastructure?

It’s all because of homosexuals asking not to be submitted to a “gay test” and abused by the police. In their fight for equal and basic human rights, oppressed minorities have ruined the country, increased illegal immigration and destroyed the economy and the Lebanese Nationalists are here to save us from these devil-worshipping and immoral groups.

To be honest, it’s videos like this that make you laugh and cry at the same time. Promoting backwardness and intolerance while quoting President Obama, and mixing homosexuality, Marxism and leftism all in the name of nationalism. I’d remove the video if I were them, unless they enjoy getting laughed at!