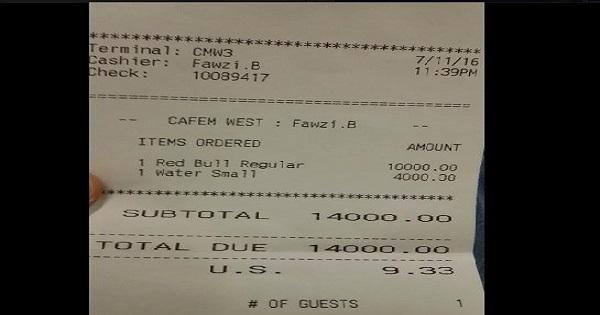 A bottle of water and a red bull cost 14,000 LL at Cafematik at the Rafic Hariri airport, while they barely cost 3,000 LL anywhere else. The above bill was shared online and went viral, forcing the Ministry of Economy & Trade to issue a statement saying that they sent a group to the airport to investigate.

It’s normal for airport prices to be more expensive than street prices but in that case, it’s an obvious case of monopoly abuse and there’s probably one company licensed to operate, similar to the airport parking lot case that’s been making headlines for the past few weeks.

I personally never buy anything from Cafematik. I’d rather starve and get dehydrated than buy a bottle of water from that place. The concerned ministry should set a cap on the prices especially when it comes to bottles of water. The ideal of course would be to set up free water stations for travelers beyond security but Cafematik would go broke in a couple of months.

Let’s wait and see what the Ministry does following its investigation. On another note, this whole story reminded of Farix’s hilarious take on Cafematik.