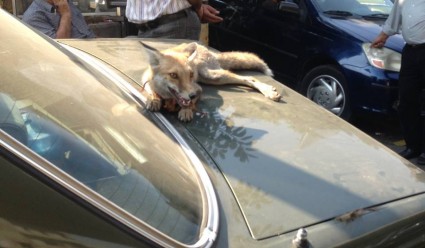 These men should be put in prison for what they’ve done. What a bunch of savages!

Here’s the original story as shared by Beta Lebanon:

A frantic phone call about a dying fox today, and 2 of our volunteers rushed straight to the scene.
To their dismay, the fox was not on the side of the Nahr el Mot highway as they were told; he was on the trunk of a car with men surrounding him as you can see in the photo. Their plan, original plan hadn’t we interfered we must say, was to tie him up on the hood of the car, drive around showing off their “trophy” and eventually sell him.

Our volunteers tried to rescue the fox, but the proud men there tried to intimidate them and scare them off, especially that they were 2 women. And one very enthusiastic man stopped them, angrily screamed at them, cursed them and asked for money in order to surrender the poor fox.

We strongly stand against the selling and buying of any animal, let alone a wild victim agonizing in front of our own eyes.

Shouts, screams, curses, but still, our volunteers tried to calm down the man and rationally explain to him that he cannot claim the fox, a wild animal that belongs to the Lebanese wild.
We are often faced with hostility during our rescues, but the same man took “aggression and ignorance” to a whole new level!

It was simple! Our volunteers refused to give up and started calling backup. So the man held the fox by the tail in one hand and a knife in another hand, and tried to skin the fox alive!

This is when you run out of patience and constructive discussions! Our volunteers aka “task force” took action, screamed, shouted and threatened, came near the fox and took him by force, and kept on threatening until the man was scared off and fled the scene, needless to say without the fox.

The fox was quickly transported to a clinic, and currently tests are being done to determine his case.
But the fox is in extremely critical state and the prognosis doesn’t look good so far!

We will keep you posted!

The fox was rescued on time before getting skinned but he was in a critical state as his spine was broken and eventually died. 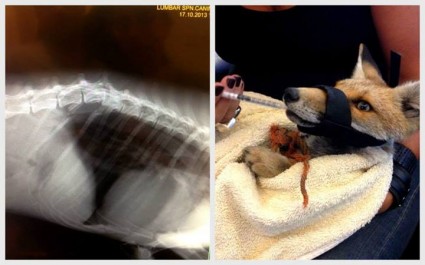 See Also:Feeding Stations For Stray Animals: An Initiative by "Save Our Strays"
Posted By Najib
Categories ANIMALS & WILDLIFE,LEBANON