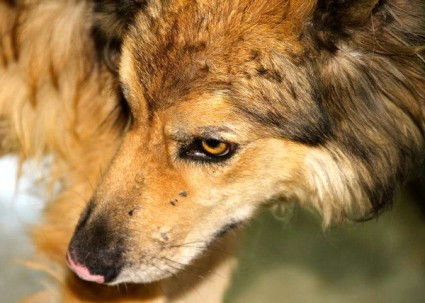 In early August 2012, a fire devastated the garage where Atilla lived as a guard dog. Chained, Attila, could not escape.

Lebanon needs to enact laws promoting animal rights and making their abuse illegal. After all, animal welfare is an international concern and is as important as other matters.

In Beirut, Lebanon animal neglect and abuse is a tragic part of daily life. With no formal system of training, rescue, and protection, urgent assistance from ordinary citizens is commonplace. The volunteers of Animals Pride and Freedom Lebanon receive and respond to urgent phone calls and messages concerning lost, abused, and injured pets and wildlife twenty-four hours a day, whether they are needed to search for an injured cat in Mansourieh, provide foster care for abandoned puppies found in Baabda Forest, or transport a bird that has been shot in Hazmieh.

Animals Pride and Freedom Lebanon volunteers, like Lebanese University Agriculture and Veterinary Science student, Shant Panossian, participate in many grassroots initiatives such as overnight rescue sweeps in various towns, picking-up stray dogs at-risk of further cruelty, and providing needed medical care. “These rescue efforts are the best,” Shant says. “I come back home exhausted, but I feel very happy for saving these dogs.”

“I try my best to help find homes for animals,” Shant says of his efforts to combat animal abuse and neglect which includes finding a permanent home for Attila, a two-year-old male Husky-Collie Mix. “We desperately need a home for Attila,” Shant says. “We hope to find him a nice home outside Lebanon.” [Source]