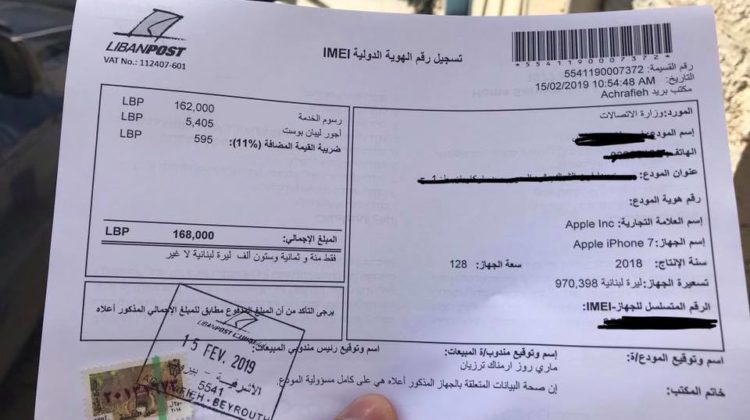 Following a few posts that went viral last week, with Lebanese citizens ranting about the new phone customs set by the MOT for personal users to pay, a few clarifications and a glimmer of hope have emerged.

To sum up the current situation, a law passed last summer stipulated that any person who had bought a mobile phone abroad (Apple and Android devices included), dating even a few years back, would have to pay custom fees once the phone enters the Lebanese territory and is detected by the Alfa/Touch network. Hence, anyone visiting the country is advised NOT to use a Lebanese SIM card on their phone to stay off the radar and avoid the huge sums of money that have been imposed.

People thought that by buying phones from outside of Lebanon, they would be gaining a few bucks, but it appears the Lebanese officials had other intentions, trying to encourage local phone selling. This way, it would be a big disadvantage to get the mobiles from abroad, as they would cost even more now with the addition of the customs’ fees.

When do you have to pay custom fees?
As soon as you replace your SIM card with a Lebanese one on your international phone, you would receive an SMS from the Ministry of Telecommunications (MOT) giving you a delay of 90 days to pay for the fees (which are up to 15-16% of the phone’s original price on the market, and this could go up to 350,000+LBP for the newest devices), or else the cell phone would be blocked from the network and you would not be able to use it.

Up until early 2019, things weren’t really serious. But after the government’s formation, everything went back in order, and the law came into effect.

A few questions remained however unanswered:

1- What about the tourists visiting the country for a few days and leaving? Would they have to pay for the fees as well?

2- Why would personal users have to pay for the mistakes and bribery of dealers in Lebanon who are smuggling phones in containers to the country?

3- Is there a way out for personal users? Would they be refunded if a new law comes out?

What we can update you with at the moment, is that:

1- Fees will be paid once per device, which means no matter how many times you would come and go to Lebanon and switch SIM cards, you won’t be asked to pay more than once.

2- If you pass by the country with an “illegal phone” and don’t use a Lebanese SIM card (keep your original international one), you will not be charged as the networks won’t be able to detect you.

3- If ever you’re here on vacation and accidentally or intentionally install your personal Lebanese SIM card, you will be asked to pay and given a period of 90 days, which you can avoid if you leave the country earlier. However, if you return after this period, it is yet unknown whether you will have to count 90 new days, or you would be already blocked.

4- On the other hand, I advise you to exchange your international SIM card with a touristic one, as these will help you bypass the networks, and you won’t be charged because you’re a tourist.

5- Finally, it seems like there are discussions to stop the fees for personal users, as stated by this article which dates back to December 2018. But we’re still in the talking phase, and for now, we will be obliged to pay before the deadlines. After all, who would want to be blocked from the réseau?

What if the fees get cancelled for personal users? Will the ones who would have paid for them get refunded if they keep their receipts? How would LibanPost decide whether the phone was used for personal purposes or not? Too many questions with a few answers, but for now, we’re in deep s….