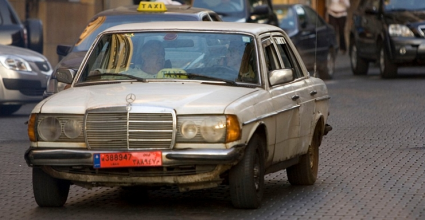 I saw this post on AlienInBeirut and thought I alert both male and female readers of the blog. I advise women to take Banet Taxi, a women-only taxi, to be on the safe side and not worry about a thing.

NEWS: There is a gang of 3 males (1 driver and 2 supposed passangers) robbing and attacking passengers in a service/taxi in the Achrafieh/Sin el-Fil area of Beirut.

Almost everyone I know in Beirut knows of someone who this has happened to, many of victims were slashed as well. Some friends even said that a couple of the victims were sandwiched into the back seat between the two male passengers who held a knife to them. Sometimes they only rob, sometimes they rob and slash the victim with the knife.

Please keep vigilant when taking a service/taxi and circulate this news as knowledge is our best form of protection and prevention at the moment until they are caught.

As a general rule, never get into a service which has 2 male passengers in it.