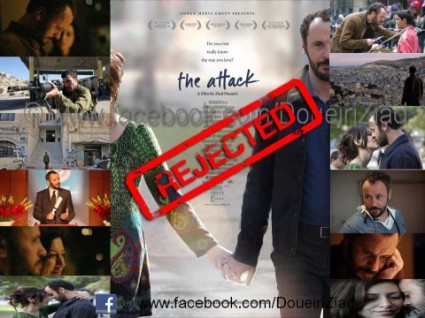 After working for six years on this movie, The Lebanese Cinema Committee rejected the movie because it wasn’t Lebanese enough, and having Israeli actors in it. Doueiri was hoping to nominate his movie for an Oscar under the Foreign Film category.

For those of you who don’t know Ziad Doueiri, he is a Lebanese-born cinematographer, film director and writer, best known for his award winning film West Beirut. He apparently originally worked as a camera assistant under Quentin Tarantinofor movies that include Jackie Brown (film), From Dusk Till Dawn, Pulp Fiction, and Reservoir Dogs. [Wiki]

Instead of supporting Ziad and allowing him to compete (and maybe emerge as a winner) at the 2013 Oscars, the Lebanese Film Committee rejected his movie. Ignorance at its best.

After having been selected at the Telluride Film Festival and Toronto International Film Festival, and having won the Special Jury Award at the San Sebastian Film Festival in Spain and the Golden Star at the Marrakesh Film Festival, the film had a high chance of being nominated for the Foreign Film category at the Oscars this year, said Doueiri. There is just one catch: In order to submit a movie to the Oscars, it must be sent in as an official selection from its country of origin – in this case, Lebanon.

And so in October 2012, Doueiri presented his film to Culture Minister Gaby Layoun, who handed it over to the Cinema Committee. But “The Attack” was rejected. “First, they said it was because wasn’t Lebanese enough,” said Doueiri. “And then it was because it wasn’t shot in Lebanon and has Israeli actors in it.” [NowLebanon]

The Attack is expected to be released on May 1, 2013 in France. I don’t know if we will see it in Lebanese theaters. I wouldn’t be surprised if they ban it.

The film, which is based on Yasmina Khadra’s French-language novel by the same name (L’Attentat), is the story of an Arab surgeon living and working in Tel Aviv. After a bomb attack in a Jewish restaurant, the surgeon finds out his wife is the prime suspect. “I was told by Focus Features, a division of Universal Studio, that the film It’s too pro-Palestinian for Americans and too pro-Israeli for Europeans,” explains Doueiri. But as a filmmaker, he believes he should be judged for his film’s quality, not politics. In the end, the US company pulled out of the project a few months prior to the start of filming, and Jean Brehat and Rachid Bouchareb, the French producers of Doueiri’s previous film, “West Beirut,” took the project.