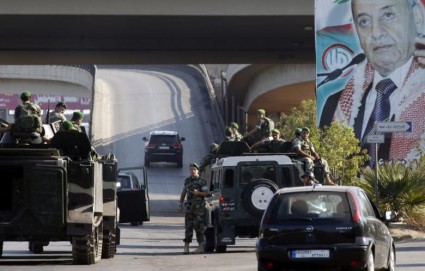 Hayat Awali, also known as 7ajje Hayat, is the spokeswoman for the families of the pilgrims and has stated yesterday that “the detention of one of their family members [Mohammad Saleh] is a political move, and that in response to that, a large group of the relatives of hostages in Azaz are heading to Beirut streets and any Turk seen there will be kidnapped”.

Ya hek Logic Ya bala!

Minister Charbel said that the “pilots are doing well” but then stated and I quote “the most important thing is that we find their location, make sure they are safe, and ensure their release”. How did he know they are doing well?

Having said that, the families of the kidnapped pilgrims have every right to get their relatives back but I really hope that they learned the Mokdad lesson and didn’t have anything to do with the kidnapping because it could only make things worse.

Speaking of bad things, Tourism Minister Fadi Abboud said “the abduction could be the last nail in the coffin of tourism”.

Forget the kidnappings, bombings and other “minor” incidents and come to Lebanon!