I will post the video as soon as I find one.

Lebanese driver Abdo Feghali, best known for being Red Bull’s frontman at drifting events, has apparently just set the world record for the longest continuous drift, as certified by the Guiness Book of Records.

As news trickles in from the record attempt today morning at the skidpad in Yas Marina Abu Dhabi, Abdo Feghali managed to double the previous record, with a distance of more than 11 km using a Chevrolet Camaro SS. We assume he was going around in a large-diameter circle to keep the drift going in an area no larger than a football pitch. While the car matters little in a stunt like this, we’d be more interested to know what tyres he used for this feat, if he made them last twice as long! [Source] 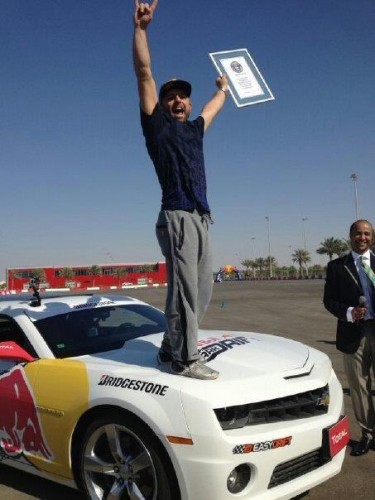