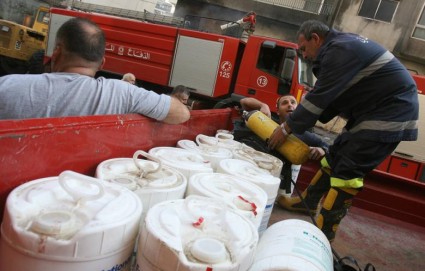 Isn’t it ironic how all this information is available to the public and no one can do anything about it?

Firefighters in Lebanon need substantial financial support to do their jobs properly and better salaries for a decent standard of living. That’s not too much to ask for individuals who are putting their life at risk to extinguish fires and save lives.

On 9 October 2001, the Municipal Council of the City of Beirut and the Council for Development and Reconstruction (CDR) issued Decree No. 751, approving the construction of a civil defense barracks on Plot No. 2639. Clause 3 of the document states that â€œthe costs of implementing the project are to be covered from the municipalityâ€™s share of the disbursements from the independent municipal fund.â€

Twenty days later, the municipality issued a new decree, No. 817, ordering the transfer of 2,250 million Lebanese Lira (LL)($1.5 million) from the â€œbudget replenishment reserveâ€ to the CDR to cover the costs of building a fire-station on Plot 2639.

But a fire-station needs electricity. This dawned on the municipal council six years after it took its original decree. Accordingly, under Decree No. 555 on 6 August 2007, a request was made to Electricite du Liban to provide the site with an electricity supply. So the money was there and the electricity was there, courtesy of EDL. The only thing missing was the fire-station itself.

Abdul-Munim al-Arees departed, and fellow Future Movement acolyte Bilal Hamad was elected head of the municipality in the 2010 elections. Under his chairmanship, the council discovered that Plot 2639 would actually be more suited to being a â€œcemetery for deceased Beirutis from the Sunni and Shia Muslim sectsâ€ than a fire-station.