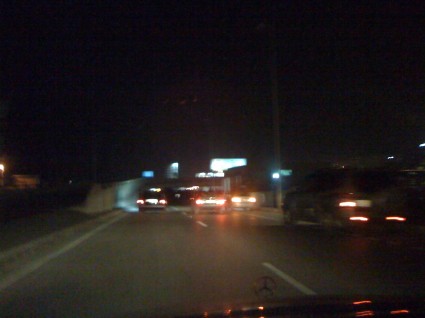 No this is not another Red Bull event, but something that occurs spontaneously every night at Marina Dbayyeh. Chahe was telling me about his friends who race on the Marina road but I thought he was joking until I saw it on Saturday night.

I was on my way back from Beirut heading to take the maritime road that gets you to ChopSticks Dbayyeh when I saw three cars blocking the road. I approached slowly and then stopped as they were going on reverse. Two cars were parked next to one another and another was on the right with its driver standing outside.

Then they started warming up and as the third car horned, they accelerated all the way until Chopsticks. The cars were an old Golf (90s) and an old BMW 3 series. The Golf won.

Next time I should park in the middle of the road and film it as it happens.

PS: Note that the ISF headquarters in the region is at the end of this road.