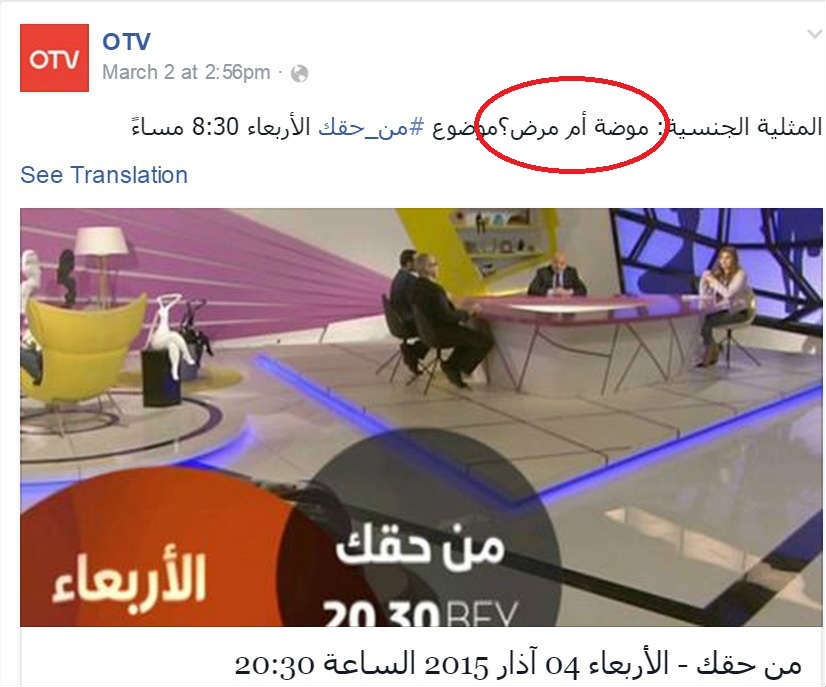 Instead of tackling homosexuality in Lebanon in an objective and scientific matter, OTV decided to promote the show by asking whether homosexuality is a fashion trend or an illness. In order to be fair, I did bother and watch the show and while the doctors and Pierre Bou Saab were mostly spot on and made sense, the host kept asking the wrong questions and making wrong assumptions and over-generalizing.

Homosexuality is not a trend nor an illness and people don’t choose to become gay. While people are affected by environmental and social factors, almost everyone agrees that sexual orientation has nothing to do with choice, and even if it did, no one is entitled to judge others based on that or call it an illness. Moreover, I don’t know why she assumed that more Lebanese recently are rejecting this “weird phenomenon” as she calls it. There aren’t any studies or surveys to prove that and if that’s the case, awareness is much needed then. We shouldn’t portray gay people as being different or weird and we should help them in their struggle against ignorance and hatred.

On another note, the host didn’t even know what LGBT stands for and thought it was a cool term gay people use nowadays. She also said biosexual instead of bisexual in the first part (Between Minute 3:20 and 3:35) and the doctor corrected her. I’m glad she didn’t bring any religious people but the show didn’t send out the right message and promoting it the way they did was a bad move.

Here’s the [first part] for those interested in watching.