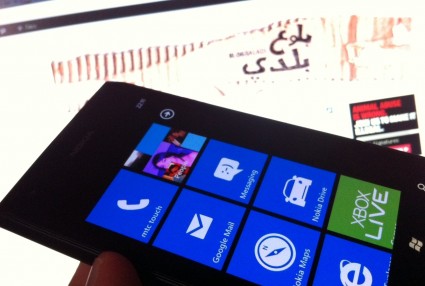 I’ve had the Nokia Lumia 900 for a few days now and so far I must say it’s been more than a pleasant experience. With its Windows-powered OS, its great build quality and gorgeous design, the Lumia 900 is one of the best smartphones out there and a strong contender to Apple’s iPhone 4/4s, Samsung’s S2 and S3. Its release date was a few months back but the Lumia 900, 800 and 710 models will be available for sale in Lebanon this week. The Lumia 900 will be priced around 600$ from what I’ve heard.

There are a lot of technical and detailed reviews of the Nokia Lumia 900 online that you can check on [CNET], [TechRadar], [Engadget] and [T3]. So, not wanting to come about this review in the same way I will pinpoint the key features, advantages and disadvantages that I noticed and are relevant to me. 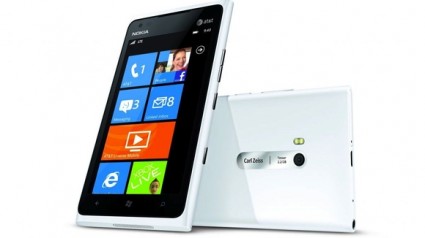 The Windows Phone OS is quite intriguing and very different from the iOS and Android systems. It provides easy e-mail access, social network integration, task-switching, office tools, and voice and Bing searches among other things and organizes the key functionalities in big shiny and colorful tiles. What surprised me the most is how quick and smooth the phone is despite the fact that itâ€™s running on a single-core 1.4GHz processor clocked with a mere 512MB of SDRAM. I thought the tiles were a bit too big and thereâ€™s a lot of wasted space around them, but that ought to be fixed with the 7.8 version. Nevertheless, the two big advantages of the tiles are that you can pin not just apps but specific features and even groups of people as well, and the personalization is very easy to do. I downloaded and used Wiztiles to configure the Batman theme and organize its tiles as shown below. 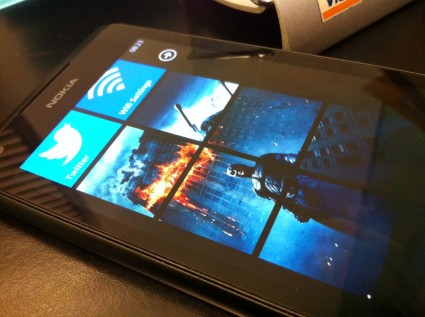 Last but not least, if you are worried about piling up more than 50 apps on the main screen, Microsoft has figured that out and displays letters of the alphabet (Once you reach 45 apps) to separate the lists. [7.8 version]

Note that you need a valid Windows Live account to be able to log in to the â€œPeopleâ€ tile and setup your social media accounts (Facebook, Twitter, LinkedIn, Outlook, and Google) and other email accounts. You also get 25 GB of free cloud storage (SkyDrive).

Almost all the reviews mentioned how beautifully designed is the Lumia 900 and I canâ€™t agree more. It feels wonderful when held in your hand and is tougher, yet heavier, than the iPhone and Samsungs. The 4.3-inch screen is protected by a Corning Gorilla Glass which has passed the Hammer test. [YouTube]

One thing I did not feel comfortable with at first was the arrangement of buttons. In fact, there are only buttons on the right side, two for controlling the volume, the power/lock button in the middle and below it the camera button. When you hold the phone with the right hand, you need to twist the phone in your hand a bit to hit the power/lock or the camera key which is a bit annoying.

The Lumia comes in three colors, black, white and blue.

Since the Lumia 900 is a Windows phone, you get the Bing-powered Nokia maps instead of Google maps, however thereâ€™s an additional free of charge navigation app provided, the Nokia Drive which could come in very handy and offers a wide variety of languages and worldwide maps in 2D and 3D. The good thing about Nokia Drive is that it doesnâ€™t require a data connection to render maps, and could save you some time and precious Mbytes especially with the lousy mobile connection and low cellular data quotas in Lebanon.

I downloaded the English navigation voice and tried the turn-by-turn navigation system between Jounieh and Beirut and it wasnâ€™t bad at all considering that we donâ€™t have proper road maps. I will try uploading a video later on showing how it works maybe with the Arabic navigation voice. 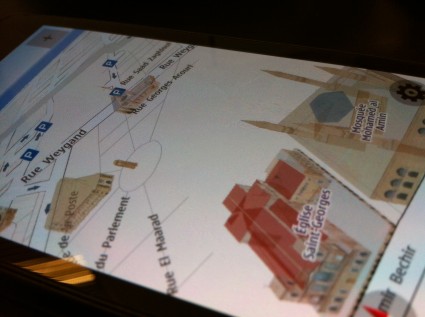 As far as apps are concerned, there are over 100,000 apps in the Marketplace which is more than enough in my opinion despite being significantly less than the Google Play and Appleâ€™s App store (500,000+). I found most of the apps I am familiar with, except for Instagram which is not there. Instead, thereâ€™s an app called Instacam which allows you to edit the picture and add some effects but thatâ€™s about it. Of course you have also the Microsoft office tools which you can use, mainly Word, Excel and PowerPoint.

One cool app that I recommend you download is the Nokia City Lens Augmented Reality Browser. City Lens instantly reveals what youâ€™re looking for on your phoneâ€™s camera displayâ€”no matter if itâ€™s down the street or just around the corner [Youtube].

You can download it from the Beta labs [Here]

If you’re a fan of Xbox then you will enjoy the preinstalled official Xbox app which allows you to keep track of your friends and interact with them.

I think thatâ€™s the only slight disappointment I had with this phone. The Lumia 900 is equipped with an 8MP camera that shoots 4:3 images up to 3264×2448 pixels, with options available for 7MP 16:9, 3MP 4:3 and 2MP 16:9 as well, and another front-facing 1-megapixel camera for video calls. You can take pictures by either clicking the camera button or using the screen. Thereâ€™s also an added feature similar to the iPhone that allows u to use the screen to adjust focus and exposure but itâ€™s not that practical and doesnâ€™t work all the time.

Outdoor images are excellent and reveal a lot more details and colors than other phones but quality drops significantly when you zoom in and sometimes the colors are washed out. Nevertheless, itâ€™s still a very decent above average camera that shouldnâ€™t stop you from buying this phone. For all I know, I might be using it wrong and need to get used to it but the thing is most people, like myself, arenâ€™t professional photographers or tech savvy and wouldnâ€™t want to waste time learning about proper camera settings to get the picture right.

PS: I will add pictures showing the difference between the Iphone4 camera and the Lumia 900 camera later on today.

I enabled 3G service the first day on the phone, downloaded many apps, used some of them, made calls and used Twitter, Facebook and other tools all day and still had some 30% left by 10 pm.

Right now as we speak, I have 48% left and itâ€™s been 1 day and 10 hours since the last recharge. The Lumia 900 battery life is excellent and to make things better, thereâ€™s an additional feature called â€œBattery saverâ€ that you can find under Settings that you can activate manually or choose to have it switched on automatically when battery is low. This feature turns off some services to help preserve the battery such as automatically receiving emails.

To sum it up, The Windows Phone OS is rapidly moving ahead of Blackberry and Symbian platform and could pose a serious threat to the domination of iOS and Android especially with the upcoming Windows 7.8 version and the release of the Windows8 Phone later on this year.

The Lumia 900 is not perfect thatâ€™s for sure but it could be the start of a long and successful partnership between Microsoft and Nokia. Iâ€™ve been an iPhone user for few years now but I wouldnâ€™t mind giving the Windows Phone a try especially if the new iPhone fails to impress.