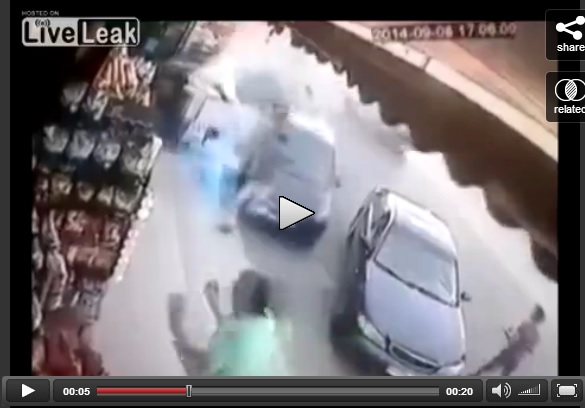 The person who uploaded this video said he took the film from the store owner and that it happened somewhere in Beirut. I can’t really tell where the crash took place but that was a very close call!

I pulled over to get something from the grocery store and was just heading towards the store when I heard screeching tires. I looked and without thinking I just ran to the store. With respect to the driver, he was a reckless guy driving above speed limit and lost control of the car so he hit the brakes and his car turned and crashed into my car and the ice-cream refrigerators outside the store. Luckily no one was seriously injured.

The store owner was kind enough to let me film his CCTV monitor before he deleted the tape, so i’ll always have this video to remind me just how lucky i was.

See Also:Electric Trains in Lebanon in the 1990s?
Posted By Najib
Categories AUTOMOTIVE,BEIRUT,INFORMATION,LEBANON