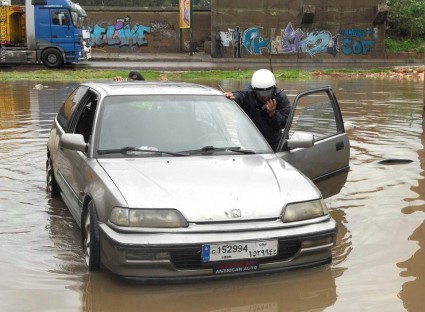 El dawoule gher2ene – Picture from We are Lebanon Facebook Page

A nice read by Ziad Naboulsi.

Whether it’s a car explosion, people burning tires, armed clashes between militias or floods you’ll find the Lebanese making fun of the situation and inventing jokes. It is amazing how they have the ability to turn any national disaster into jokes and comments. This is one of the little things that this fragmented and divided country has to bind its people: humor, the dark kind. However, humor is a not a healthy sign at all in Lebanon, it is a sign of the hopelessness, indifference and surrender to the hard reality the Lebanese have reached and are living every day.

These jokes contribute to bringing the Lebanese to a state of mind described as the “weed effect”; distracted from the initial problem – which they should be furious about – they compete in sharing and laughing about jokes they create. Making fun of every disastrous situation keeps the Lebanese from pointing fingers in the right direction: in the face of the government that failed and keeps failing to protect its citizens from natural or man-made disasters. To some people making jokes is a good indicator of the sense of humor a population has and its willingness to laugh and live no matter how bad the situation is, but coming back to reality, this is a really bad sign. [Full Article]