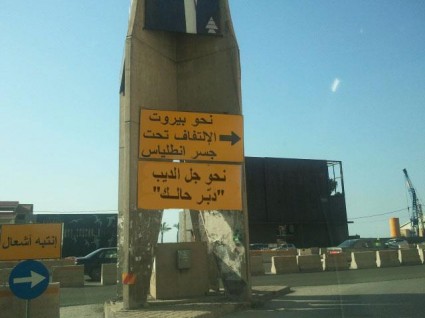 Jal el Dib residents held a sit-in at the location of the dismantled bridge of Jal el-Dib to protest the lack of an alternative for traffic [Naharnet]. They have been blocking the road for an hour and 15 minutes now but according to MTV, the police started opening the roads just now (8:14am).

I honestly can’t blame them and I would do the same, even if it upsets Lebanese going down that road. Jal el Dib needs its vital bridge and it’s the Jal el Dib residents’ right to demand an alternative for the dismantled bridge.

You can check their FB group [Here].