When I first read the title of this article, I checked the date to make sure it’s not an old post, then I read the whole thing 3 times just to make sure it’s not a satire post and I still can’t believe that someone, Robert Fisk in that case, would believe that “Beirut has the chance to revive its steam-age role as a key transit hub”, and that Syria’s relaunching is going to happen sometime soon and have a positive impact on Lebanon. I mean seriously? A Tunnel from Baabdat to Chtaura? A train from Beirut through the Bekaa, Syria and the Gulf and all the way to Europe? Who are we kidding here?

Eugene Sensenig-Dabbous, an Austrian politics professor at Notre Dame University in Lebanon and engineer by profession, told his Unesco audience that “railways are a regional, international issue because infrastructure development is one of the keys to the future of the Middle East”. Talking later, he was more specific. “The majority of the freight for re-launching Syria after the war will obviously go through Beirut. The Syrian port of Lattakia is too small. The reopening of the old Tripoli-Homs train line, which is still relatively intact, could be done quite quickly.

Now the funniest part is how Mr. Maalouf is “relying on the sheer frustration of the automobile-intoxicated Lebanese to bring back the trains”. Don’t get me wrong as I have the utmost respect for the Ecuador-born Lebanese filmmaker Elias Maalouf, but Lebanese have been cursing yet electing the same people for more than 20 years now, and they seem to be fine living without a president, without infrastructure, water, electricity or internet. They couldn’t care less about trains being renovated or turned into UN heritage sites and they are building houses and nightclubs all over them (unless the government paves a new road over the railway).

All in all, the poster below is the closest thing we will get to seeing trains in Lebanon again. Enjoy the [article] and keep dreaming Lebanon 🙂 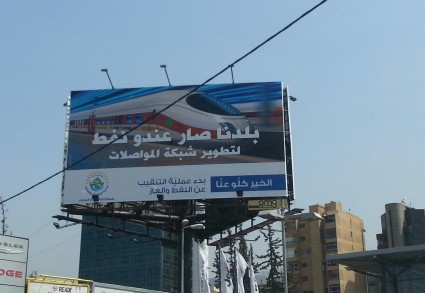