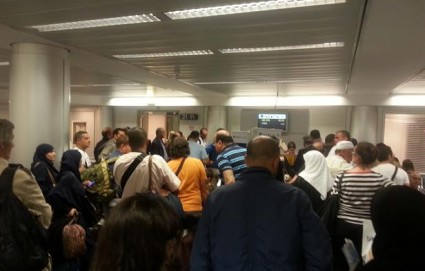 I always enjoy reading Joumana Haddad‘s articles. This one’s hilarious yet so true.

Lebanese people do not queue. This aversion to waiting patiently for their turn in anything, at any given time and place, is so common, so “natural” and innate, that you’d think it’s written somewhere in their genes: The Swedish are blond. The Chinese have slanted eyes. And the Lebanese don’t, won’t, can’t queue. It is a (para)scientific fact.

Every single day, I experience first-hand encounters with this phenomenon. Take yesterday for example. I was waiting in line for my turn at a payment desk in one of Beirut’s malls, and a guy suddenly appeared from nowhere, and headed directly to the cashier, completely ignoring my presence and that of three other women in front of me. Maybe we were invisible, because the stud didn’t even look our way. What’s worse is that the three ladies standing ahead in line were going to let him get away with it. But I wasn’t. I couldn’t. I wouldn’t: That’s the kind of things that are written in my genes. As soon as he stretched out his hand with the bill and credit card, I stepped forward and asked him to wait in line like the rest of us. He gave me one of those “you talkin’ to me?” looks, so I gave him the “you’re an asshole” look. When the cashier agreed with me, the de Niro aficionado had to surrender and go to the end of the line mumbling something about “crazy people.” What can I say? Guilty as charged.

Also yesterday, another similar scene in the evening at a hip restaurant in downtown Beirut. A guy (again) walks in, apparently without a reservation. When the hostess told him there is a half an hour wait for a table, his nerves (already pressured by his dire need to impress the 30-years-younger-than-him woman hanging at his arm) couldn’t handle it. He started screaming at the employee, and insulting the management of the place. “You don’t know who I am” seemed to be his favorite catchphrase, since he repeated it more than a dozen times before storming out. And yet no, the hostess didn’t know “who he was,” neither did the rest of us dining there.