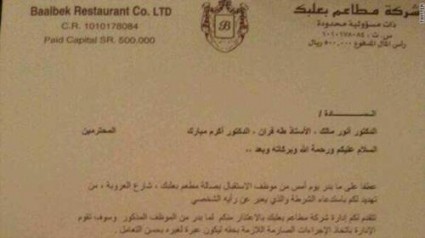 An employee at the Lebanese Restaurant Baalbeck in Riyadh, has reportedly threatened two customers for offensive remarks on Hezbollah’s secretary general Hassan Nasrallah. After the news spread, Saudis were angered by the story and a campaign was launched in the KSA (And a hashtag too #مقاطعة_مطعم_بعلبك_بالرياض) to boycott the restaurant. The restaurant’s management apologized for the employee’s behavior and promised to take the necessary measures.

I don’t know what got into this employee’s mind to pull something like that, but he surely picked the wrong place at the wrong time. They are already posting names of other Lebanese restaurants to boycott in KSA and Kuwait as well, just check out the tweets on the hashtag being used.