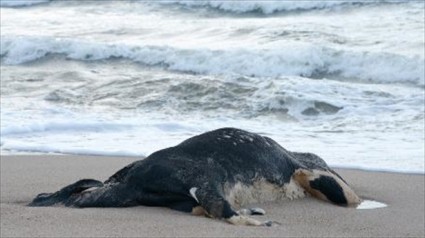 Denmark and Sweden have been investigating for days how fourteen dead cows ended up on their shores and it seems it was a Lebanese ship who dropped the dead cows in the sea. Not only did they do that, but the ears were cut off to remove the earmarks identifying the animals.

Dumping slaughter waste is illegal in the Baltic Sea and the crew could be charged with animal cruelty. Swedish police spokeswoman Ewa-Gun Westford said and I quote that “She’s been working in the police for 40 years and had never dealt with such a crime”.

Maybe we should invite her to visit Beirut’s slaughterhouse and see what goes on there.

Fourteen dead cows that washed up on the beaches of Denmark and Sweden were probably dumped overboard by the crew of a Lebanese ship after it encountered bad weather, Danish police said Friday.

“The police suspects that (the source is) a Lebanese ship that was transporting live cattle from a US port to Europe,” the South Zealand and Lolland-Falster Police said in a statement.

“The ship ran into a storm in the Bay of Biscay, in which a number of cows died,” it added.

The animals, the first of which was found on December 31, also had their back legs tied together and their stomachs cut open. The ears had been cut to remove the earmarks identifying the animals, police said.

“The reason the stomachs had been slit open was probably to ensure the animal sank, and the back legs were probably bound so that a crane could grab and hoist the cow overboard,” it said.

The Lebanese ship’s crew had asked to unload the dead animals in a Russian port but were turned down, after which they most likely dumped them around 18 kilometres (11 miles) off the Danish island of Bornholm, police said. [RawStory]

Leave a Reply to Thanks Cancel reply