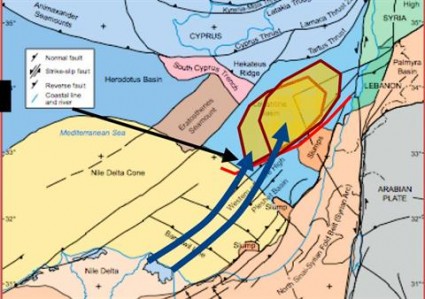 We all know by now that Lebanon’s oil and gas reserves off its coast might be the richest and best in the Mediterranean, and a lot of Lebanese are thrilled about this discovery and already started dreaming about a wealthy country with a solid infrastructure, prosperous economy and a strong army, but transparency and accountability are needed to make the best out of these resources and we are very far from that in Lebanon!

Corruption is at an all time high, Our MPs have extended their term, we don’t have a president and most of the parties handling the oil & gas file are not trustworthy. For that sake, I’ve been following up mostly on reports from [Executive Magazine] and [MESP], and other useful articles like HMA Tom Fletcher’s take on this matter and what George Sassine, who’s an energy policy expert, had to say about it.

George Sassine also happens to be one of the founders of LOGI, The Lebanese Oil and Gas Initiative (LOGI), which is an independent NGO based in Beirut that aims to create a network of experts across the world to help Lebanon benefit from its oil and gas wealth, and avoid the resource curse. I was introduced to LOGI by a friend a week ago and I think what they are aiming to do is exactly what Lebanon needs to maximize the economic and social benefits of its oil and gas wealth. We need an expert’s point of view on these issues and we need competent individuals to inform us citizens on the key issues facing facing Lebanon’s oil and gas industry, and help us understand what’s happening around us and what’s being cooked behind our backs by corrupt parties. Once policies are set in motion and contracts are locked for decades, it will be impossible to change anything and we might fall into the resource curse forever!

Just in case you don’t know what the resource curse is, it is also known as the “paradox of plenty and refers to the paradox that countries and regions with an abundance of natural resources, specifically point-source non-renewable resources like minerals and fuels, tend to have less economic growth and worse development outcomes than countries with fewer natural resources. This is mainly due to governments mismanagement, corruption, instability and other factors”.

LOGI is asking people to join their initiative and support them to kick off the initiative through a dedicated website and finance their first research projects. The website will include infographics, dynamic animations, videos, detailed reports and a database of all analyses and news articles on oil and gas in Lebanon both in Arabic and English, and the first research projects will include policy briefs on Lebanon’s export infrastructure strategy, and fiscal policy strategy. LOGI already secured a large part of the amount needed ($10,000), which is honestly nothing when compared to the billions at risk if the oil & gas goes into the wrong hands.

I’m not writing this post to ask readers to donate money as I’m sure they will secure it before the deadline, but to shed the light on this initiative and ask those interested to get engaged and contribute to driving change in Lebanon. I honestly believe we need similar initiatives for all our problems in Lebanon whereas experts join hands to inform the citizens of what’s really happening, put pressure on the government and concerned parties and offer solutions and reports. On the other hand, it is important for us as citizens to follow up on these NGOs and hold them accountable when they break their promises, the same way we should be doing with our politicians.

You can read more about LOGI [Here].

Georges Sassine is a Harvard University alum and an energy policy expert with a wide range of experience with several multinational companies. He has been widely published commenting on energy, transparency and public policy issues including the Financial Times, CNN, the Huffington Post, Annahar, L’Orient le Jour, the Daily Star and others.

Karen Ayat is a Partner and Contributor to Natural Gas Europe – a leading platform that provides information and analyses of natural gas developments. Karen emerged as a key expert on the geopolitics of the Eastern Mediterranean and her work has been widely published, mainly by Natural Gas Europe and Energy Tribune. She holds an LLM in Commercial Law from City University London and reads International Relations and Contemporary War at King’s College London.

Jeremy Arbid is an energy and public affairs analyst focused on Lebanon’s oil and gas industry. He is currently a journalist covering economics and government policy for Executive Magazine in Beirut. He holds a Master in Public Administration from the American University of Beirut, and a bachelor in Political Science from Hamline University in St. Paul, Minnesota.

LOGI’s Advisory Board is formed from several high level executives and experts spanning multinational energy companies, an international energy law firm, a world renowned think tank, academics from top universities, as well as experts from global NGOs focused on transparency in the oil and gas sector.