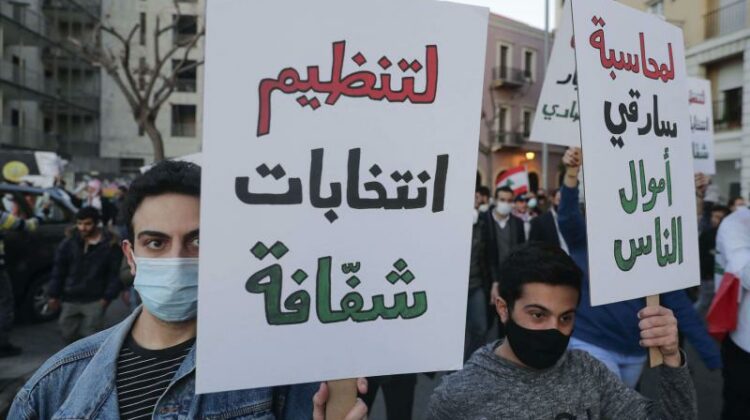 Lebanese protesters lift placards demanding accountability for public fund misappropriation and transparency in elections, as they march in a downtown street of the capital Beirut, on March 12, 2021. (AFP)

During the 2018 elections, over 7000 violations were recorded by LADE (Lebanese Association for Democratic Elections) including volunteers intervening in the voting process, votes being moved out from ballot boxes, bribes, and over 200 cases of intimidation or coercion on electors. Add to that the media violations that are still pending at the publications courts since 2018.

More violations are expected in the upcoming 2022 elections and to make things worse, the supervisory commission for elections doesn’t have a budget to operate. The head of this commission retired Judge Nadim Abdelmalak stated they need a budget of 5,8 billion Lebanese pounds, or around $250,000 at the market rate, plus $75,000 for technical equipment. In fact, the commission faces eviction from its offices as it hasn’t paid rent since 2020.

All in all, don’t expect transparent elections when the same crooks are running the show. The only silver lining is that international associations are more interested than ever in these elections and might fund plenty of NGOs and organizations to monitor polling stations.