On the same day Al-Assir was visiting Kfardebian, Ghassan Seifeddine and his son Hady were killed in Wata Al-Jawz by Anthony Khalil during a personal dispute. Residents of Lebanon’s Jbeil town of Lassa, hometown of both victims, reacted by blocking roads and threatening to march to Baabda, and warned of a civil war (See video of Lassa’s Sheikh speech above) if the killer is not handed to the authorities. 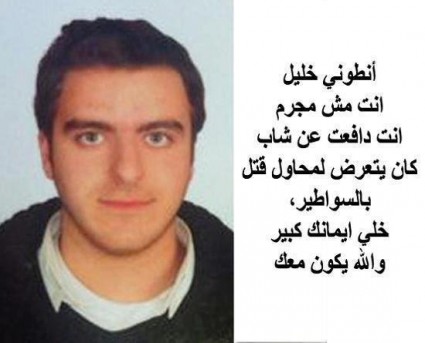 Even though they have every right to be saddened by this tragic incident and demand that the killer give himself in, I don’t understand their reaction specially that some reports are saying Anthony killed the two men in self-defense. Apparently, members of the Seifeddine family were beating Pierre Nakhoul (who will reveal the full story to the authorities soon) when Anthony happened to pass by, so he stopped his truck and “started shouting at the Seifeddines in an attempt to have them stop. Two of them then attacked Khalil with a machete and a knife. It was at this point that Khalil took out a gun, shoot the two of them, and killed them”. [Link]

I have no idea if the story is correct, nor am I trying to defend what Anthony did, but it’s obviously a personal dispute that ended the wrong way, so the best is to leave it as is without blocking roads and turning it into a sectarian matter. Whether he did it in self-defense or not, he still shot two people dead and this is punishable by law.

Until then, may the victims rest in peace and let’s hope we never hear of such incidents anymore. Too bad two other people were shot dead by a third one during a car chase last night on the Khaldeh highway.