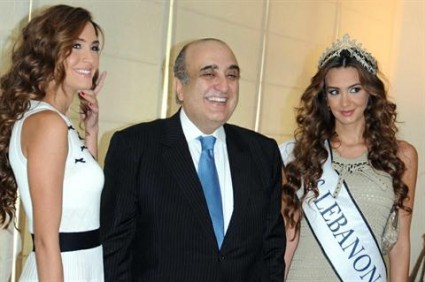 Picture taken from the DailyStar

Lebanese Tourism Minister Fadi Abboud met Miss Lebanon for the year 2012 Rina Chibani on Monday and praised the success of this year’s pageant after years of corruption allegations. He also praised the contest calling it a “real taste of beauty, education and culture” in contrast to the “commercially controlled pageants of the previous years.” [Source]

If what Fadi Abboud is saying about corrupted and commercially controlled previous pageants is true, then he is indirectly accusing himself of being part of all this since he has been serving as a Minister of Tourism since 2009 and is part of the organizing committee for the previous miss Lebanon editions. In fact, not only did he help organize Miss Lebanon last year, but he even went through the Miss Lebanon 2011 applicants in order to ensure the competition’s high standards.

Maybe we should get our new gorgeous new Miss Lebanon to visit all the ministers and politicians and make them say things they might regret later.