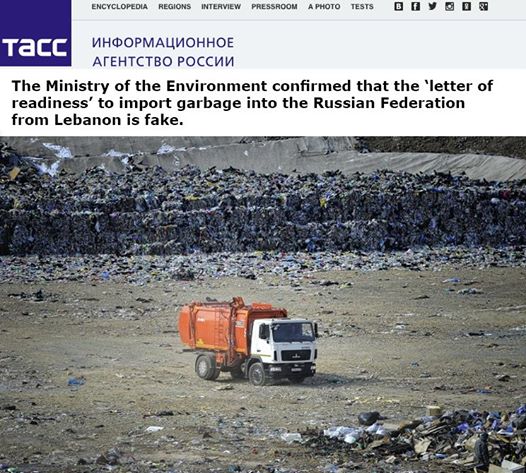 So first we’re told Russia has agreed to import Lebanon’s solid waste, then Chinook Urban Mining, the company in charge of exporting Lebanon’s trash, says they reportedly obtained approval from the Russian Environment Ministry and now Nikolai Gudkov, press officer at the Natural Resources and Environment Ministry is saying the documents presented were fake lol!

Minister Akram Chehayeb doesn’t know anything about it and is blaming it on the Council for Development and Reconstruction. Environment Minister Mohammad Machnouk is useless as always. Even Russian Ambassador to Lebanon, Alexander Zasypkin said his embassy is not involved in the matter.

I tried locating the TASS article (screenshot shown above) but I couldn’t so I assume it was written in Russian. I also tried to see if there’s a guy called Nikolai Gudkov in Russia but all I got were stories about a Russian chess master who got electrocuted while playing chess. I even searched on the Russian Ministry of Natural Resources and Environment and still nothing.

Update: The article was in Russian only. Here’s the [link] and Gudkov does exist. He’s the head of press service of the Russian Ministry of Natural Resources. Thank u Mario Achkar!