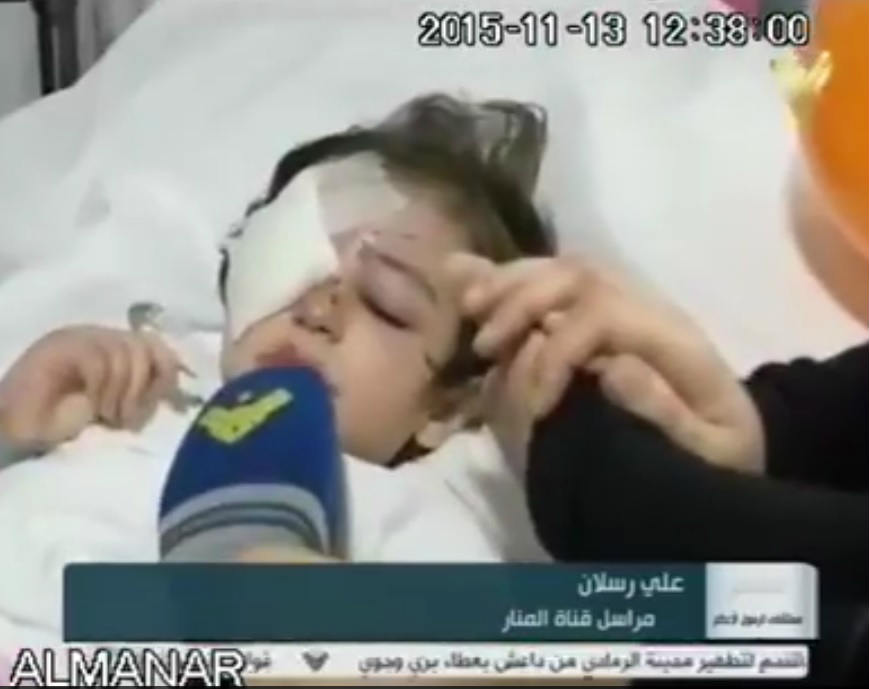 Al-Manar TV Reporter Ali Rasslan decided to visit Haidar, a three-year boy who got injured in the Burj Barajneh blast and ask him about his dead parents. The reporter was clearly aware that Haidar was orphaned after both his mother and father died in the explosion that took place on Thursday in Bourj al-Barajneh, yet he thought it would be a smart idea to visit him at the hospital while he’s laying in bed injured and ask him about his parents’ whereabouts.

To make things even worse, he started by asking the poor kid who’s seriously injured and still traumatized from the blast if he’s ok! Eh walla he’s doing just great. He just survived a terrible bombing, he may have lost his right eye, he just lost both his parents and is laying in a hospital bed instead of playing with his friends or watching TV. He’s having the time of his life I’m sure!

Needless to say, most of the TV reporters here in Lebanon cover the events in an unethical and inappropriate way. This video just happened to be gone viral and caught my attention. Nada Andraos was asking one of the mothers if she saw her dead child’s body. Georges Saliby was asking a kid if he has anything to tell his deceased parent at the worst possible time etc …

I think the Lebanese media needs to take lessons from the French and watch how unfortunate incidents are covered properly.

Check out the video [here].

Here’s a video showing MTV interviewing Haidar and another child Mohammad at the hospital as well (Starting Minute 7:00)