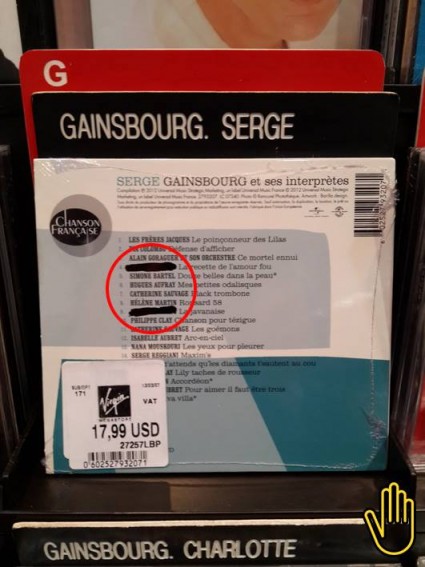 I really have no idea why this 86-year old French singer was censored on Serge Gainsbourg’s cd. If anything, it was Gainsbourg who sang something that has to do with Israel (Blasphemy!).

Juliette Gréco was born in Montpellier to a Corsican father and a mother who became active in the Résistance, in the Hérault département of southern France. She was raised by her maternal grandparents. Gréco also became involved in the Résistance, and was caught but not deported because of her young age. She moved to Saint-Germain-des-Prés in 1946 after her mother left the country for Indochina

Gréco became a devotee of the bohemian fashion of some intellectuals of post-war France. Jean-Paul Sartre said of Gréco that she had “millions of poems in her voice”.[1] She was known to many of the writers and artists working in Saint-Germain-des-Prés, such as Jean-Paul Sartre and Boris Vian.

Gréco spent the post liberation years frequenting the Saint Germain cafes, immersing herself in political and philosophical Bohemian culture. As a regular figure at music and poetry venues like Le Tabou on Rue Dauphine, Greco became acquainted with Miles Davis and Jean Cocteau, even being given a role in Cocteau’s film Orphée in 1949.[2] That same year, she began a new singing career with a number of well-known French writers writing lyrics; Raymond Queneau’s “Si tu t’imagines” was one of her earliest songs to become popular. 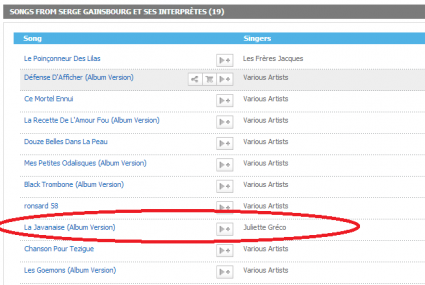 Here’s a [link] to the blasphemous song “La Javanaise”.

See Also:No We are Not Getting an Apple Store in #Beirut Soon
Posted By Najib
Categories CRITIQUES,HUMOR,LEBANON,MUSIC