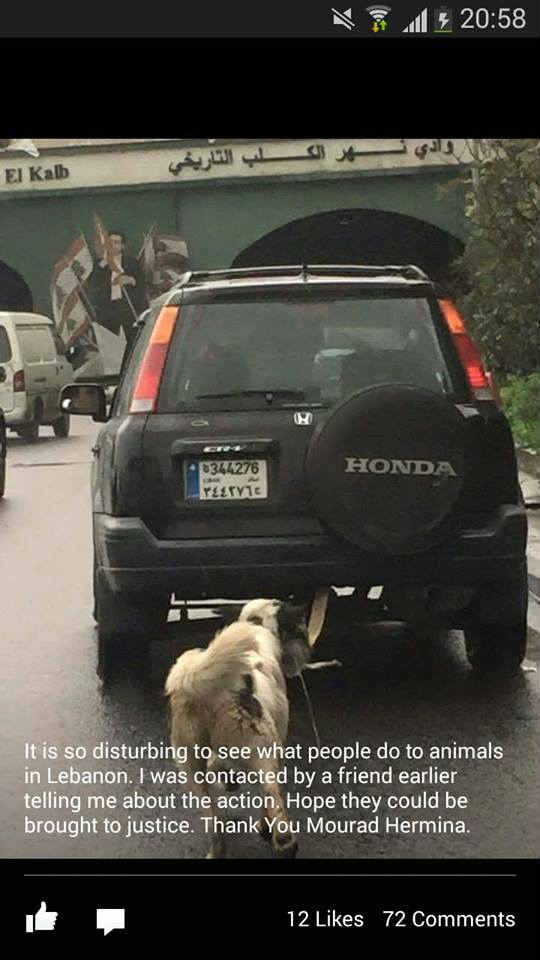 After BETA shared a picture of a Honda CRV on the Jounieh highway with an animal tied to the car, the driver reached out to BETA and told them the full story. As shown below, Mr. Nehme apparently was trying to help the dog by driving him to a training school in Nahr el Kalb, but since he couldn’t put him in his car, he thought he’d tie him to the back of his CRV and drive slowly till he gets to the training school.

Of course it’s good to hear that the man has good intentions, but tying the dog and driving for a long distance was a terrible idea. He put the dog’s life in danger and other drivers’ lives as well by driving slowly on a highway.

JACK : A STORY OF GOOD INTENTIONS THAT WENT WRONG
Yesterday, all animals lovers were sharing the photo of Jack, the dog who was tied to a CRV and dragged around the Nahr El Kalb area; we shared the photo and expressed how harshly we condemn what happened.
Jack is now at a foster home under BETA’s supervision, he is being taken care of and we are making sure he will recover from the aftermath of yesterday’s incident.
However, we would like to clarify the other side of the story, from the point of view of Mr. Edward Nehme, the owner the Honda CRV in question.
Jack was brought to the neighbourhood of Mr. Nehme, and apparently he was being aggressive and somehow terrifying the neighbors, so Mr. Nehme took a personal initiative with very good intentions and decided to locate the dog to a training school in Nahr El Kalb, Mr. Nehme told us that no matter how hard they tried to put Jack in the car, he wouldn’t go in and wouldn’t cooperate at all; So one of the neighbours suggested tying Jack to the back of the CRV and driving very slowly, and this is what happened.
The training school management did not accept to take the dog but helped Mr. Nehme get the dog in the car.
The dog was taken to a vet who advised Mr. Nehme to take Jack to our shelter, where an animal lover accepted to take the dog and ensure a foster for him because we cannot accommodate more dogs at the shelter.
Mr. Nehme didn’t know any better so he drove long distances and tried his best to get the dog to safety; we surely do not accept the way this was done, and we will do our best it never happens again, but we know it was done with good intentions.
The dog now is fine, he has minimal damage in his paws, which shows that the car was driven very slowly, and he will visit the vet to make sure he is healthy.