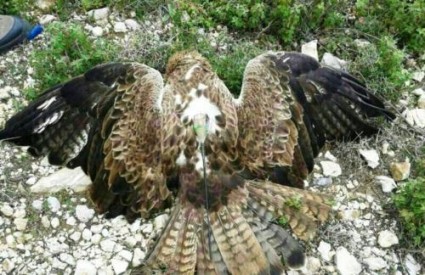 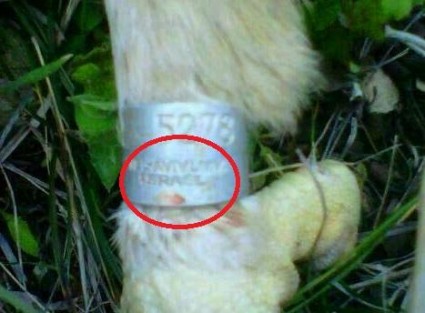 Both Pictures taken from LebanonDebate

A bird was caught in Achkout by a local hunter wearing a GPS transmitter and a leg bracelet engraved with the “Tel Aviv University” logo. The website that posted the story claimed said that the device attached to the eagle, was obviously being used for the purpose of spying on Lebanon by the Mossad, and such birds were spotted in KSA in 2010, Turkey in 2012 and Egypt this year.

I made a quick search and found out that a “spy” eagle was also spotted in Sudan in 2012 and here’s what the Israelis had to say about it:

Commenting on the story, a spokesperson for Israel’s Parks and Nature Authority confirmed that the device was indeed Israeli – but that it was a simple GPS device, which provides location information on the bird. “We have attached these devices to about 100 eagles,” the spokesperson said. “The GPS transmits the bird’s location. The device was made in Germany, and no modifications are made in Israel.” The birds, all of them from several rare species of eagles, are part of a worldwide study that tracks the flight pattern of the birds, in order to develop environments that will help the species to recover, among other goals. [Link]

Similarly, Prince Bandar had the bird released in 2010 after it got caught by a local hunter in a remote part of the Saudi desert, saying it’s a bald eagle and not a spy.

The story began when the bird was caught by a local hunter in a remote part of the Saudi desert. Because it was wearing a GPS transmitter and leg bracelet engraved with the words “Tel Aviv University” the creature immediately became a suspect in an international espionage plot.

One week later, Prince Bandar stepped in to clarify matters and accuse the Saudi media of “irresponsible reporting.”

The prince ordered the release of the bird, which he identified as a bald eagle, and explained there was no question the bird was no spy.

“These systems are fitted to birds and animals, including marine animals. Most countries use these systems, including Saudi Arabia,” Prince Bandar told Saudi media, according to Emirates 24/7. “We have taken delivery of this bird but we will set it free again after we [have] verified its systems…

“Some of the Saudi journalists rushed in, carrying the news of this bird for the sake of getting a scoop without checking the information,” he continued. “I am not defending Israel, but we need to be clear. They should have asked the competent authorities about the bird before publishing such news.” [Link]

Honestly speaking, I don’t think Israel needs vultures and eagles to spy on us. On another hand, I wonder why hunters are shooting down eagles in Achkout? I’ve been told by few friends that a lot of Lebanese hunters shoot down anything that flies whether they are going to eat it or not. If that’s the case, I think this matter is way more serious than investigating with a bird holding a GPS device.