Lotus declared its return to Lebanon in style by holding a big event at ‘MAD’ nightclub and bringing 2007 F1 champion Kimi Raikkonen. Everyone was wearing suits and well-dressed except for Kimi who showed up in jeans. He also didn’t look excited one single bit and as u see from his hand gestures in the video, he’s like “Yeah let’s get this over with”, or given his drinking habits he was probably saying “BlaBla let me go get a drink now!”. No wonder he’s nicknamed Iceman. What a guy!

I was disappointed though that Kimi did not show off his skills in the streets of Beirut in a special event using a Lotus or F1 car, similarly to what F1 Champion Sebastian Vettel did last year in his hometown. [YouTube]

You can watch the full interview [Here].

The Lotus cars displayed outside were awesome. I had my eyes on the white one but they were all pre-sold unfortunately (mahek?). 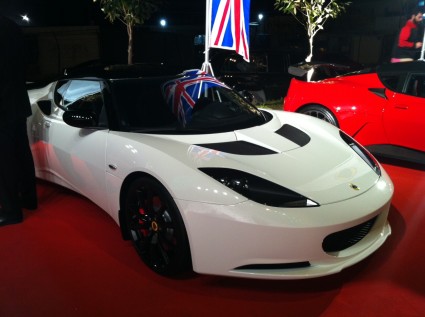 You can check pictures of the events [Here].