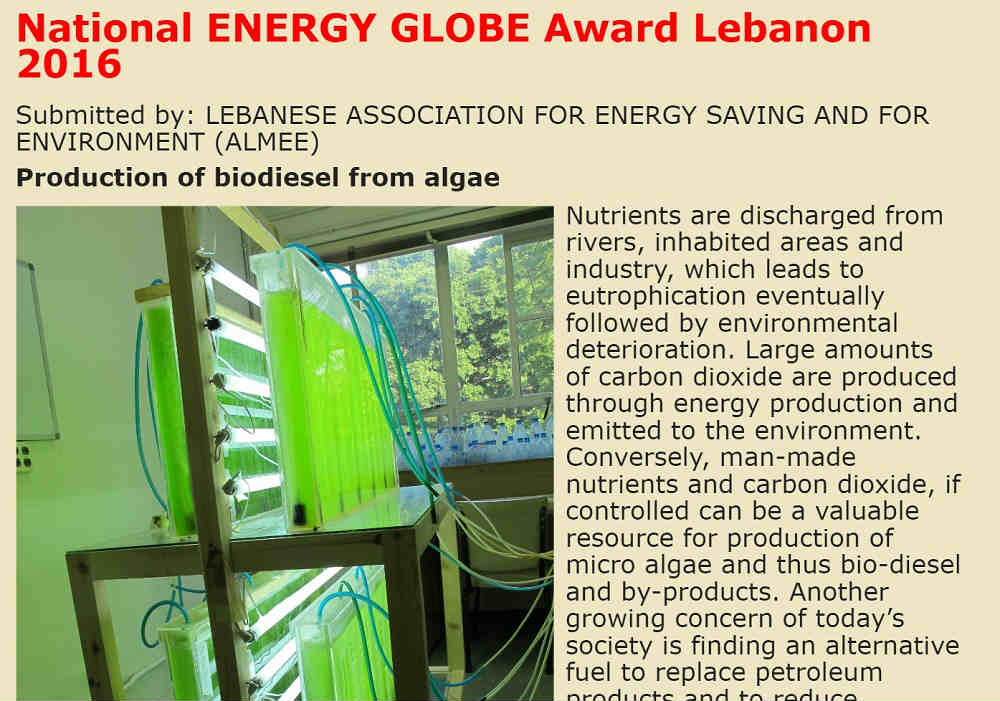 It’s always great to share news about awards and achievements won by Lebanese abroad but I’ve learned out of experience to verify the story before spreading the word. Yesterday I was reading in Annahar about a Lebanese project that won an Energy Globe Award 2016 against 1700 other projects presented.

This would have been a major achievement and I am sure that Lebanese are capable of doing so, but I couldn’t find any reference or source proving that we won that award. The Energy Globe Award is real and is considered the most prestigious environmental prize worldwide. It basically “distinguishes projects regionally, nationally and globally that conserve resources such as energy or utilize renewable or emission-free sources”.

Every year, the Energy Globe Award is awarded in the 5 categories Earth, Fire, Water, Air and Youth to projects yet Lebanon was not among the winners this year. He was not even among the finalists.

What we did win though is the National Energy Globe Award which is presented to the best project submission of each country. I have no idea how many Lebanese projects were submitted but here what this project is about:

Nutrients are discharged from rivers, inhabited areas and industry, which leads to eutrophication eventually followed by environmental deterioration, and large amounts of carbon dioxide are produced through energy production and emitted to the environment. This year’s National Winner of the Energy Globe Award in Lebanon established a delivery chain for microalgae to ensure the use of micro algae for the production of biodiesel. The project contributes to an enhanced energy self-sufficiency based on renewable resources. Congratulations to your initiative!

I loved the idea but it will be very hard to implement when you have a government who couldn’t figure out how to pick up garbage from the streets for eight months and doesn’t mind dumping garbage in the sea.

PS: If anyone has additional information about this award please do share.

You can read more about this project [here].