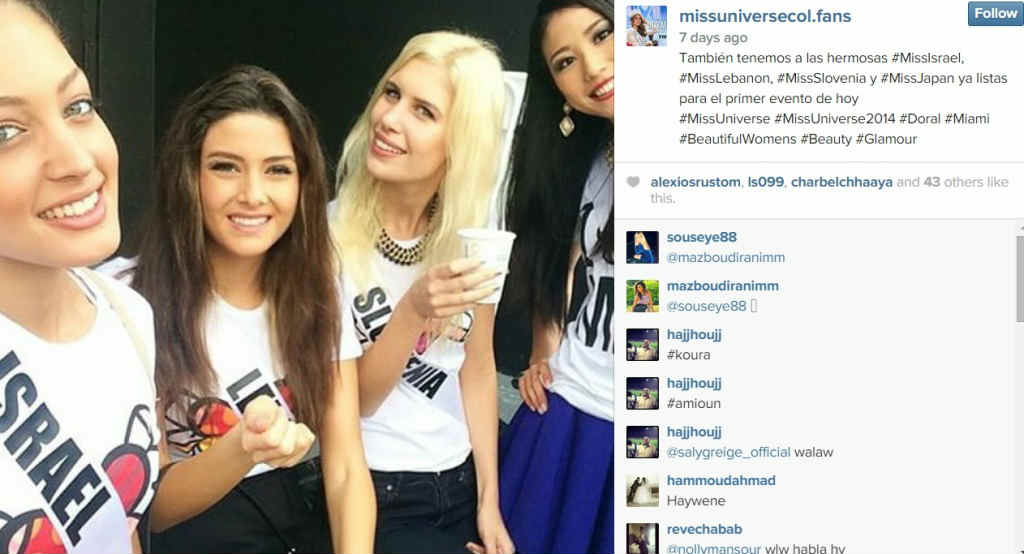 PS: It seems Miss Israel photobombed Sally’s selfie by taking her own selfie. This calls for a new hashtag #Incelfie 😛

I just noticed people have been tweeting all day at Miss Lebanon Sally Jreij because of a selfie that included her and Miss Israel. I looked a bit and found that Miss Lebanon’s manager issued a statement where she says that she was being harassed by Miss Israel and that Miss Israel photo bombed her picture. If this is really the case, then the organizers should have taken action and avoided this whole mess.

In all cases, I think the statement Sally is pretty clear and she should report the picture and have it removed if it’s going to cause her trouble. Until then, let’s focus on more serious issues we have in Lebanon, like the two Lebanese army soldiers that were injured after Israeli troops tossed smoke grenades in Aita el Shaab today.

“To all my supporters and Lebanese citizens, I would like to thank you indeed for your continuous support of Miss Lebanon at the Miss Universe contest …The truth behind the photo: Since the first day of my arrival to participate to Miss Universe, I was very cautious to avoid being in any photo or communication with Miss Israel (that tried several times to have a photo with me).

I was having a photo with Miss Japan, Miss Slovenia and myself; suddenly Miss Israel jumped in, took a selfie, and put it on her social media. This is what happened and I hope to have your full support in the Miss Universe contest”