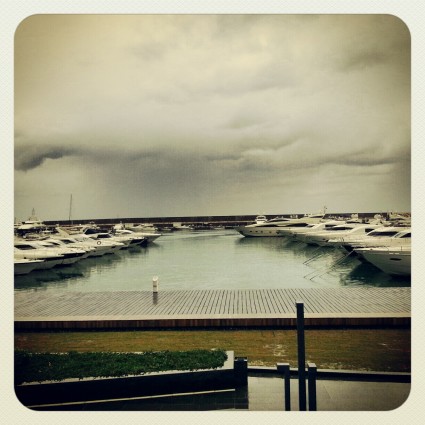 This was posted on Thursday on Amarres Bistro & Cafe Francais’ Facebook page:

Our lovely restaurant Amarres in Zaitunay Bay has had to close down. A word from our CEO:
Business in Lebanon is going through bitter/sweet times. We decided to close our restaurant Amarres in Zaitunay Bay but are opening our 2nd Couqley branch in Blueberry Square, Dbayeh on May 15th. Since 2012, the economic climate in Lebanon has been too harsh to sustain large restaurants in Zaitunay Bay, a destination that demands stability. It is sad to shut down a good restaurant in a beautiful location but the decision is the correct one for us. The business model is unsustainable. Amarres at Zaitunay Bay depended on 3 customer pillars: (1) Lebanese Living in Lebanon (2) Lebanese Expats (3) Tourists. Since May 2012, with the harsh political & security issues affecting Lebanon, Amarres at Zaitunay Bay has seen only 1/3 of the required 3 customer pillars. The good news is that our other outlets are thriving; Couqley, The Angry Monkey, The Tanning Salon + Couqley 2nd Branch opening May 15th in Dbayeh 🙂

750,000$ means 62,500$ a month and almost 2000$ a day.
– If a meal costs on average between 30 and 50$ at restaurant X, it will need between 40 and 70 customers EVERY day to break even.
– This will only cover the rental fees without taking into consideration wages, maintenance and operating fees etc…

We’ve already had a bad summer season and this one doesn’t seem too promising, so it might be a good idea for the Beirut Municipality and/or whomever is managing the Zaitunay Bay to lower these exorbitant rent prices and let businesses survive this crisis Lebanon is going through. If no initiatives are taken, expect more closures in the upcoming weeks/months.