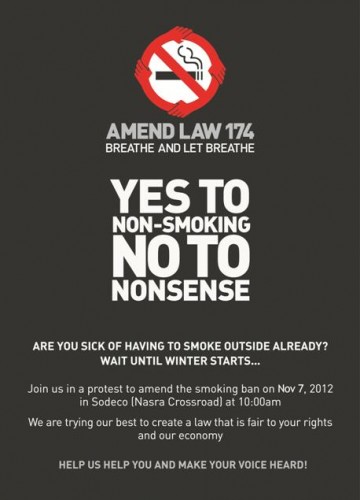 Ever since the smoking-ban law 174 went into effect on September 3, there’s been an ongoing debate on whether this decision will affect negatively the restaurants and pubs or not. For that sake, the Syndicate of Owners of Restaurants in Lebanon came up with a study conducted by Ernest & Young that proves that indoor smoking ban will harm the economy, only to be refuted few days later by the AUB Tobacco Control Research Group and activists from Lebanese civil society. 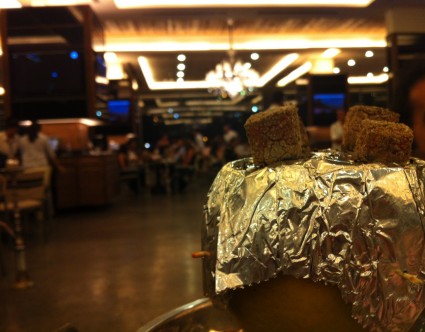 I will not bother dig into those studies again as they don’t reflect what’s happening on the ground, at least not from what I’ve seen in the past two months. In fact, all the restaurants that serve Shisha that I’ve been to lately were almost entirely empty indoors and packed outside and to name few, Babel, Saniour Sea View, Leila, Republic, Public, Al Falamanki, Saif el Ba7er and Basma. As for restaurants that don’t serve Shisha, those with an outdoor area had a clear advantage and attracted more clients, with few exceptions like Roadster diner that wasn’t really affected by this law. Pubs I’ve been recently were just like in this video I posted yesterday.

Therefore, the effect the smoking-ban law had on restaurants and pubs is rather visible but that doesn’t mean we should not keep it as it is or protest against the ban in the way the syndicate is doing. Raising slogans like “are you sick of smoking outside already?” is rather stupid and will only weaken their demands. On the other hand, the government is properly enforcing the law in Beirut and Mount Lebanon but failing to do so in remote areas and in some governmental buildings and offices.

Having said all that, should the law be amended? In my opinion, yes and I will explain why.

1- As I had explained in previous posts, the problem in Lebanon is not the cigarette but the Shisha because there is no such thing as a smoking lounge in Lebanon, but there are a lot of restaurants that people frequent just to smoke Shisha. Those Shisha places are very popular nowadays and also attract a lot of Arab Tourists, which is why they should be given some special license to operate legally as a Shisha lounge. Nevertheless, the licenses should be limited and a pre-condition for those thinking of starting a new Arguile place.

2- The decision to ban smoking should have been delayed by few months as it came at the worst moment for all businesses, specially after the weak touristic season we had. If the government insists that no amendments should be done to the law, they can always put the implementation on hold until after the winter season ends.

3- Even in the most advanced countries, licenses are given for smoking lounges, so I don’t see why it shouldn’t happen here. If some people insist on smoking, let them all go to a place dedicated to smokers only. That way, they will only be harming themselves.

4- Implementing the smoking-ban law should have been done gradually, and not all at once. Even though there was a year notice, but I believe no one was prepared for that law and the government didn’t make any effort in that matter. For example, the simplest thing to do would have been stopping new Shisha places from opening during that year, which did not happen.