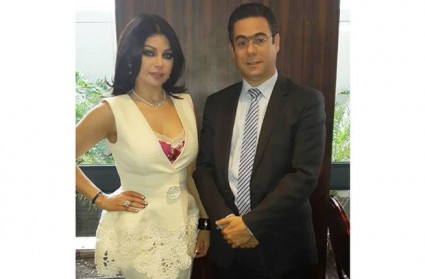 Let’s hope Haifa’s sister will stop blocking roads and causing trouble after this campaign. I also hope we won’t have more accidents from people looking at Haifa posters lol!

On a serious note, traffic accidents are still on the rise in Lebanon so any awareness campaign that might reach out to a bigger audience is more than welcome.

Haifa Wehbe was appointed on Friday as the Lebanese Communications Ambassador for Humanitarian issues, with a main priority of raising awareness among Lebanese youth against the use of mobile phones while driving.

The star will take part in an awareness campaign under the slogan “Don’t Text and Drive,” Agence France-Presse reported.

The campaign will be plugged through social networks in order to draw the attention to the seriousness of phone use while driving and reduce traffic accidents caused as a result. [AlBawaba]